END_OF_DOCUMENT_TOKEN_TO_BE_REPLACED

GOLD PRICES rose above $1870 per ounce in London trade Tuesday, gaining 2.5% from this time last week to reach levels last seen in January as Western bond yields slipped together with stock markets amid the worsening surge of Covid infections and social restrictions in Asia.
Silver prices also jumped again, rising to $28.50 per ounce to come within $1.50 of February's #silversqueeze peak at what was a 7-year high when first reached last August.
The US Dollar meantime fell near 3-year lows versus the Chinese Yuan on the FX market after new data showed the Beijing authorities selling a little of the $1 trillion in US government bonds from the nation's foreign reserves.
Beijing also injected the equivalent of $1.6 billion into its domestic money market Tuesday, aiming "to maintain reasonably ample liquidity in the banking system" of the world's 2nd largest economy.
"Solid price dynamic at play here," says one London bullion desk of gold and silver's gains.
"The current near obsession with inflationary forces," says another, "is less significant for gold than what real yields are doing."
Week-to-week, gold prices have moved in the opposite direction to the yield on 10-year inflation-protected US Treasury bonds two-thirds of the time across the last 5 years.
With gold prices today peaking at $1873 – a new 3-month high – the yield on 10-year TIPS fell back to -0.93% per annum, a fresh 3-month low which marked a series record when first reached last July.
Conventional 10-year yields meantime held at 1.64%, putting 'breakeven' inflation forecasts – as implied by the US Treasury-bond market – up at 2.57% per annum, a fresh 8-year record.
Consumer-price inflation has over the last decade averaged 1.76% according to official data, but it read 2.50% across the previous 10 years of 'commodity supercycle' price rises. 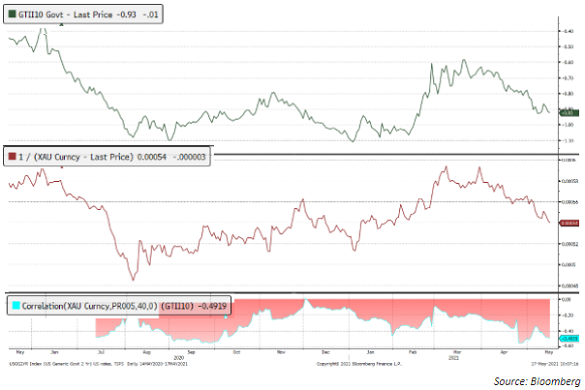 March's jump in US borrowing costs, when the conventional 10-year Treasury yield spiked at its fastest year-on-year pace ever to hit 13-month highs, coincided with the China government cutting its holdings of Washington's debt for the first time in 5 months, new data showed last night.
Gold prices meantime sank to $1675 per ounce, from where the metal has now rallied 11.7% in Dollar terms.
"Mainly it reflects China's caution," says Chinese Academy of Social Sciences researcher Zhou Xuezhi, speaking to the South China Morning Post.
"[Beijing] didn't have much confidence in the rebound of the US Dollar index, and in the meantime took a wait-and-see approach on how US fiscal stimulus unfolded."
"The increasing inflation chatter in the market, outsized CPI print last week and most importantly of all, stable nominal yields in the US have all [now] helped to contribute to the momentum seen in gold over the past few weeks," says Tuesday's trading note from Swiss refiners and finance group MKS Pamp.
Monday's action "[saw] that momentum continue on the technical break of the 200-day moving average.
"Decent demand from speculative and retail customers was seen from the open."
"Gold is currently scaling three-month highs," adds Rhona O'Connell at brokers StoneX, "driven not just by the level of real interest rates, but the resurgence of the virus in parts of Asia as well as intensifying tension in the Middle East.
"Notably, gold exchange-traded products...steadily eroded so far this year...have now enjoyed six consecutive days of net investment and this can become self-fulfilling given the frequency with which the numbers are made available."
The plunge in so-called crypto currencies meantime eased off Tuesday, with only 3 of the 10 "most critical" such digital assets losing value in US Dollar terms over the prior 24 hours.
That still put the market capitalizaton of all crypto-currencies more than 15% below last week's fresh record above $2.5 trillion.
Both the giant GLD and IAU gold-backed ETF trust funds increased in size yesterday, expanding by 0.7% and 0.1% respectively.