END_OF_DOCUMENT_TOKEN_TO_BE_REPLACED

GOLD PRICES rallied from a new 11-week low versus a strong US Dollar on Tuesday as London returned from the UK's May Day Bank Holiday to find the precious metal $60 cheaper from Friday's benchmark rate ahead of this week's May interest-rate decision from the Federal Reserve.
With US inflation now running at 8.5%, the central bank led by Jerome Powell is expected to hike its overnight Fed Funds rate to a ceiling of 1.0% per annum tomorrow, the first such half-point rise since early 2000.
Like gold prices, global stock markets today rallied from new 15-month lows on the MSCI World Index as longer-term rates in the bond market edged back after reaching 3.0% on US Treasury debt –  double the cost of borrowing for Washington this New Year, and the highest since late 2018.
Last time 10-year Treasuries offered 3.0% annual yield, gold prices traded $650 per ounce lower than today.
Ahead of the Fed's decision on Wednesday – and with Australia's 10-year borrowing costs hitting 2014 highs after the Reserve Bank raised its overnight rate for the first time in over a decade despite looming federal elections – borrowing costs also continued to hold multi-year highs for Eurozone and other Western nations, hitting 2.0% on UK Gilts and 1.0% on German Bunds for the first time since late 2015.
The US currency meantime edged back further from last week's spike to 20-year highs on its trade-weighted index, helping gold prices fall aggressively for non-Dollar investors as well.
UK gold prices in Pounds per ounce dipped beneath £1480 as the Euro gold price also hit 4-week lows at €1757. 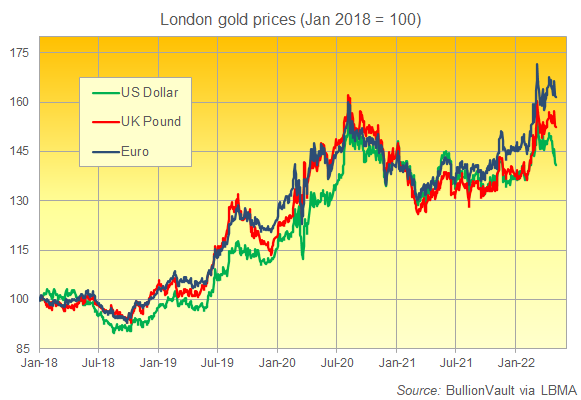 The week-ending last Tuesday saw hedge funds and other speculative traders in Comex gold futures and options cut their bullish bets, net of bearish positions, by 1/5th according to latest data from US regulators, down to the smallest since early February.
With the physical wholesale bullion markets of both Shanghai and London then shut on Monday for national holidays, Comex gold futures contracts for June delivery lost over $40 per ounce yesterday, closing at their lowest since 16 February – a week before Russia formally declared its invasion of Ukraine.
Giant gold-backed ETF the SPDR Gold Trust (NYSEArca: GLD) meantime shrank another 0.2% yesterday after seeing 1.6% liquidation last week, the first weekly outflow in three.
"Trading in Asia today [was] subdued," says Swiss bullion refining and finance group MKS Pamp, noting that Tokyo's stock market also closed Tuesday for a national holiday while China – the No.1 gold consumer nation – remains shut until Thursday.
"Expectations of a rate hike at [tomorrow's] FOMC meeting and weak Chinese data released over the weekend weighed on the market."
With China's factory activity shrinking faster than analysts expected on April's PMI surveys, shares in Chinese e-commerce giant Alibaba (HKG: 9988) meantime sank almost 10% at Tuesday's opening in Hong Kong after a press report said someone called "Ma" – but apparently not founder and CEO, Jack – had been arrested for "seeking to split up the country and subvert the state."
Media tycoon Jimmy Lai was meantime charged with commercial fraud in a Hong Kong court today, where state prosecutors are using Beijing-imposed laws to assert that this amounts to a national security threat.
"Outspoken economists and prominent investors are being silenced on social media in China," says the South China Morning Post – pointing to Hong Hao, ex-head of research at Bank of Communications (Bocom) and now removed from WeChat and Weibo – "as Beijing tightens its grip on online speech amid mounting economic pressure and growing controversies surrounding its zero-Covid policy."
Silver prices were firmer than gold on Tuesday after falling harder yesterday, regaining $1.50 per ounce from Monday's 13-week low of $22.13.
That still put the more industrially useful precious at its cheapest versus gold since September 2020, with the Gold/Silver Ratio reaching 82.5 today as gold regained $10 per ounce after touching $1850 per ounce – its lowest Dollar price since mid-February – at the start of trade in London, the global bullion market's central storage and trading hub.
Commodity prices meantime rose again as Russia's continued invasion of Ukraine saw the European Union move to impose further sanctions against its energy-and-metals-rich eastern neighbor, but without as yet winning agreement from all 27 member states over banning crude oil imports.
Moscow's Vladimir Putin today signed a decree banning the export of raw materials – such as natural gas and crude oil – to countries on the Kremlin's  as-yet unpublished sanctions list.
Russia also today accused Israel of "supporting the neo-Nazi regime in Kyiv" – led by Jewish-born Ukrainian Volodymyr Zelensky – after Moscow's foreign minister Sergei Lavrov told journalists Monday that "the most ardent anti-Semites, as a rule, are Jews.
"So what if Zelensky is Jewish?" Lavrov said.
"I believe that Hitler also had Jewish blood."