END_OF_DOCUMENT_TOKEN_TO_BE_REPLACED

GOLD PRICES rallied on Friday, gaining $40 per ounce from yesterday's new 10-week low against the surging US Dollar and setting new month-end record highs in Euros and Sterling as global stock markets also bounced from this month's sell-off.
But with gold ending April 2022 above $1900 per ounce, government and corporate bond prices fell to seal their worst 1-month drop in at least 3 decades, edging longer-term borrowing costs back up towards last week's new multi-year highs ahead of next Wednesday's US Fed meeting.
Faced with the worst inflation since the deep recession of 1982, policymakers led by Jerome Powell are expected to hike the overnight cost of borrowing by half-a-percentage-point.
That will put the Fed Funds rate at a ceiling of 1.0%
Consumer price inflation last month reached 8.5%.
While silver prices meantime rallied weakly from fresh 11-week lows on Friday, down over $3 per ounce from mid-April's peak above $26, "The Bloomberg Global-Aggregate Total Return Index [of fixed-income bonds] has lost 4.9% in April," says the newswire and data agency, "putting it on track for the biggest monthly drop since its inception in 1990."
For the month as a whole, gold has dropped 1.9% in Dollar terms and silver prices lost 5.6%, both the steepest fall since September.
Global stock markets have fallen harder, marking their 3rd monthly drop in 2022 so far and the worst loss since the Covid Crisis crash of March 2020.
So-called "real rates" have meantime leapt, taking the yield on 10-year inflation-protected TIPS bonds up to zero for the first time since New Year 2020.
That put real rates – against which gold typically shows a strong negative correlation – more than 0.4 percentage points higher from the end of March, the steepest 1-month jump since the 2013 gold price crash ending that June. 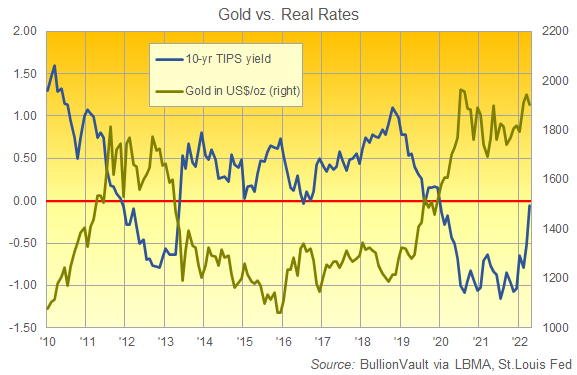 Last time real rates jumped that fast, gold prices lost $200 while the MSCI World Index dropped 2.6%.
This month gold slipped by $37 per ounce as the MSCI lost almost 6.0%.
New US data said Friday that the cost of living on the core PCE index – the Fed's preferred measure, for which it targets 2.0% inflation – slowed in March to a 5.3% annual increase, 0.1 points below February's 39-year record.
The yield on benchmark 10-year US Treasury bonds today edged up towards last Friday's peak of 2.90% per annum, the highest since end-2018.
"There was a resurgence of Covid-19 cases from the Omicron variant and decreases in government pandemic assistance payments," said the Bureau of Economic Analysis on Thursday, reporting that – after accounting for inflation – real GDP in the world's largest economy declined at a 1.4% annualized rate across January to March.
Excluding early 2020's 2 quarters of contraction amid the first wave of Covid lockdowns, that was the first such drop in US economic activity since Q1 2014 and marked only the 2nd decline of the last 10 years.
That compares with 7 quarters of annualized decline over the previous 10 years, 2 over the decade before that, and 3 over the preceding 10 years starting spring 1982.
Currently imposing anti-virus lockdowns in Beijing and Shanghai, world No.2 economy China meantime saw activity in Jilin – "a rust-belt province in the northeast" – shrink by 7.9% in January-March from a year earlier, says Channel News Asia, "in a rare contraction after being overwhelmed by a wave of Covid-19 cases towards the end of the quarter."
Inflation across the 19-nation Eurozone this month rose to 7.4%, the Eurostat data agency said Friday.
Gold priced in Euros on Friday held above €1800 per ounce, showing a 3.0% rise for April at a new all-time record high monthly close.
UK gold prices in Pounds per ounce also rose for a 3rd month running even as the metal fell against the Dollar, gaining 2.5% to set a new month-end record above £1515.
Ukraine meantime said Russia "showed the United Nations the middle finger" by shelling Kyiv as UN Secretary General António Guterres was visiting on Thursday, killing at least one.
"Russia is looking to 'divide and rule' Europe with its rubles-for-gas demand," says an op-ed at Deutsche Welle, as "a handful of European companies are gearing up to comply with Moscow's demands that they pay for Russian gas in Rubles" while the Kremlin cuts off Poland and Bulgaria for not helping buoy the Russian currency.
Apparently proposing to use Moscow's huge gold bullion reserves to back the Ruble – which Russian citizens cannot exchange for foreign currency since the Kremlin's attack on Ukraine met with Western economic and financial sanctions – "The most important condition for ensuring Russia's economic security is reliance on the country’s internal potential," said Putin advisor and secretary of Russia's Security Council Nikolai Patrushev to state-newspaper Rossiyskaya Gazeta this week.
Ideas around backing a currency with gold "do not contradict the conclusions of economic science, they contradict the conclusions of Western economic textbooks," he said.