END_OF_DOCUMENT_TOKEN_TO_BE_REPLACED

GOLD PRICES jumped to 7-week highs just below $1770 per ounce Thursday afternoon in London after new data showed a record jump in US retail sales coincided with last month's $1,400 Covid stimulus checks sent to most US adults.
"Retail sales explode [for] March as consumers use stimulus checks to spend heavily," says CNBC after the new data showed a record 24.4% year-on-year rise in shopping and food services purchases.
Gold prices in China had earlier fixed in Shanghai at a premium over London quotes of more than $11.40 per ounce, the highest incentive for new imports to gold's No.1 consumer nation in 5 weeks.
"China still needs an expansionary economic policy," says former PBOC policy maker Yu Yongding, writing at Project Syndicate.
But the People's Bank of China – which last night released a working paper suggesting the world's most populous nation end its one-child policy to try reversing its fast-ageing demographics – meantime "disappointed" investors, Bloomberg says, by failing to inject more liquidity into the banking system with $23 billion in short-term loans.
"[China must] strengthen market regulation of raw materials to ease the cost pressure of companies," said Premier Li Keqiang in a speech made last week and reported on Sunday, pointing to the steep jump in industrial prices thanks to the world's No.2 economy re-opening from last year's Covid Crisis.
"It is understandable that [Beijing] would want to try and modify input costs," says analyst Rhona O'Connell at brokerage StoneX.
"The impact on gold of this policy is negligible – unless it fails...[because] fears of rising inflation would certainly underpin domestic gold physical demand...already picking up smartly after over a year in the wilderness.
"[Also] if China is exporting more expensive goods as a result of higher costs...that will feed through into inflationary forces of its trade partners." 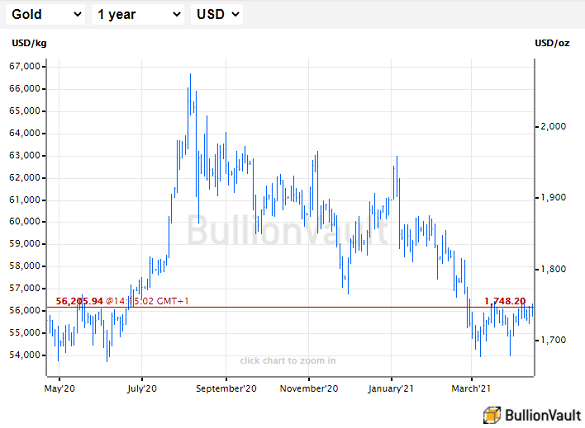 Western investment funds backed by gold saw their first outflows in almost a week on Wednesday, with the giant SPDR Gold Trust (NYSEArca: GLD) shrinking 0.3% to a new 12-month low in size.
Competitor gold ETF the iShares product (NYSEArca: IAU) meantime shrank 0.2% to its smallest since mid-August.
The $1.9 trillion Covid relief bill proposed by new president Biden and approved by Congress and the Senate at the start of March takes Washington's total stimulus and support payments over the last 12 months to "about $5 trillion," says CNBC, "fueled by red ink that fiscal authorities say is necessary to keep the economy running."
But central bank the US Federal Reserve will not start to raise its key interest rate from zero until after it has started to "taper" its quantitative easing purchases of US government and other debt assets, Fed chair Jerome Powell said in a speech Wednesday.
As for crypto-currencies, "They're really vehicles for speculation...[and] they're not really being actively used as payments," Powell replied to a question about Bitcoin from the Economic Club of New York.
"My customers are fully focused on Coinbase right now," MarketWatch quotes Anthony Denier, CEO of retail-investor stock platform WeBull, after the crypto-trading site Coinbase floated on New York's Nasdaq exchange at a valuation of more than $80 billion.
Founded in 2012 and with perhaps $223bn of digital assets on its platform, Coinbase was valued at just under $6bn last September.
Bitcoin prices today retreated 3.3% from yesterday's fresh all-time high above $64,000 but held nearly 115% higher for 2021 to date.