END_OF_DOCUMENT_TOKEN_TO_BE_REPLACED

GOLD PRICES failed to hold a rally from 1-week lows in London on Thursday, dropping back towards what technical analysts called 'support' around key moving averages as Western stock markets erased earlier losses following yesterday's sharp gains to multi-month highs.
Singapore surprised traders and analysts by easing its monetary policy, aiming for 0% appreciation of its currency against the US Dollar.
The Bank of England then surprised no-one by holding its UK lending rate at 0.5% for the 85th month running.
"With [Wednesday's] down draft," says a technical analysis from Canadian bank and bullion market maker Scotiabank, "gold formed an evening star pattern on the chart, which could point to some downside in the near-term...likely [to] test the $1231 support" – the 50-day moving average of gold prices.
Gold overnight touched $1228 per ounce in Asian trade, where contract prices in Shanghai – now due to launch a Chinese Yuan benchmark 'gold fixing' amongst 12 banks and 6 other participants on Tuesday next week – had earlier slipped 0.9% to a 1-week low on the strongest volume since last Thursday.
Gold then rose $10 per ounce over the 45 minutes following the Shanghai close, before dropping back $10 to $1235 in London ahead of the New York open.
Looking at gold's exponential moving average – a measure of underlying trends which gives more weight to recent prices within the range – "Prices are hovering around the 200-EMA  line," says a technical analysis from Dutch bank ING, noting how gold failed to rise above that line in mid-February, but "the downside reaction was very shallow."
This marked "a totally different situation" from 2013 and 2014, when "prices sold off heavily after testing this moving average line," says ING, concluding that gold's "current consolidation around the EMA-200 line [is] a sign of strength...suggesting prices are building momentum."
Fundamentally however, "The strong increase in gold prices [so far in 2016] has dented demand for the metal," says a note from French investment and bullion bank Natixis, reporting an increase in the cost of lending gold (which carries storage and insurance costs) known as the forward rate.
This rising cost of lending gold – driven by lower demand to borrow metal – means that "for the first time since early 2013, gold lease rates have turned negative," the bank goes on, highlighting how gold bullion borrowers can now earn a small return on the payment received from a gold lender versus the rate of interest they would otherwise have earned on cash deposits, albeit of just 0.02% per annum on 3-month deals. 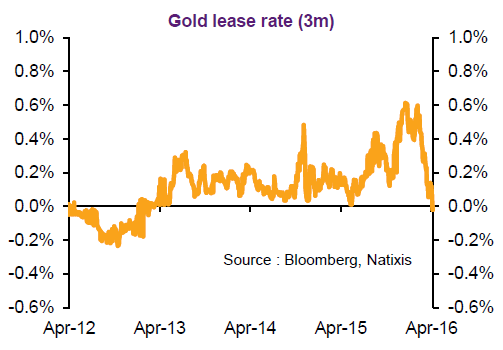