END_OF_DOCUMENT_TOKEN_TO_BE_REPLACED

GOLD PRICES held again in a tight $5 range either side of $1290 per ounce on Wednesday in London, edging sideways as world stock markets rose but New York opened lower after weaker-than-expected US jobs data.
UK gold prices in Pounds per ounce fell back to unchanged for 2019 to date beneath £980 as Sterling rallied hard following Prime Minister Theresa May moved to compromise on Brexit, opening talks with opposition Labour Party leader (and career " Marxist") Jeremy Corbyn and accepting that Parliament might vote to ask the European Union for another extension to Article 50 later today.
Euro gold prices also neared 2-week lows, trading down to €1147.50 as the single currency rose against the Dollar amid better economic data from the 19-nation currency zone.
US employers added 25% fewer jobs than analysts forecast in March, new data from the private-sector ADP Payrolls estimate said today.
That came after February saw US durable goods orders beat forecasts in today's data releases.
"We're expecting a rally in gold prices to really kick off in the fourth quarter," said Neil Meader of specialist analysts Metals Focus on Tuesday, launching the consultancy's new Gold Focus 2019 in London and predicting a Q4 peak of $1400.
Pointing to continued low interest rates worldwide, the risk of a "correction" in stock markets, "a whole range of tail risks" from geopolitics, and also to possible US Dollar weakness, the longer-term picture for gold looks strong because "US Federal debt is on an unsustainable path," Meader went on.
The spread between 10-year and 1-year US Treasury rates widened to 0.11 percentage points this morning, the steepest since last Tuesday saw the yield curve "invert" – with shorter-term rates above long-term rates – for the first time 2007.
"Looking specifically at the difference in yield between Treasuries maturing in one year and those maturing in 10 years," said research from the Dallas branch of the Federal Reserve earlier in 2019, " every US recession during the past 60 years has been preceded by a yield-curve inversion, and every significant, sustained inversion but one has been followed by a recession.
"In the single exception, during the mid-1960s, the economy's growth slowed sharply, but fiscal stimulus prevented a downturn." 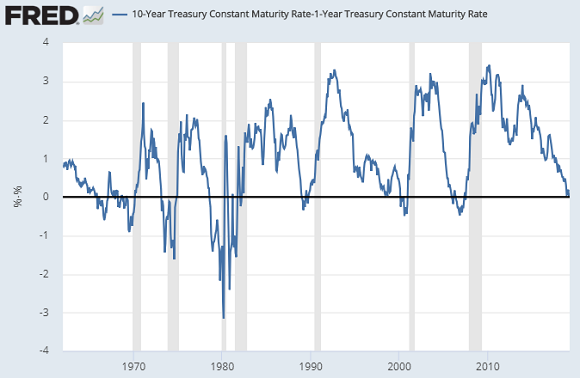 Analysts at US investment bank Goldman Sachs claimed last week that a better indicator is the 10-minus-2 year yield – now flattening around 15 basis points as longer-dated Treasury prices hold firm, keeping yields low – because of "international spillovers" from ongoing zero-rate and QE money creation policies outside the United States.
"As a result, the curve inversion signal could be less powerful for recessions than in the past, since long dated yields across regions have become more correlated."
But alongside last month's yield-curve inversion, US equity prices "are also at historically unsettling levels" says Meader of Metals Focus, with the S&P500 index of US corporations now moving above 31 times cyclically-adusted earnings.
That puts the long-term price/earnings ratio sharply higher than its 50-year average of 20 or its 100-year average of 17 times net income. 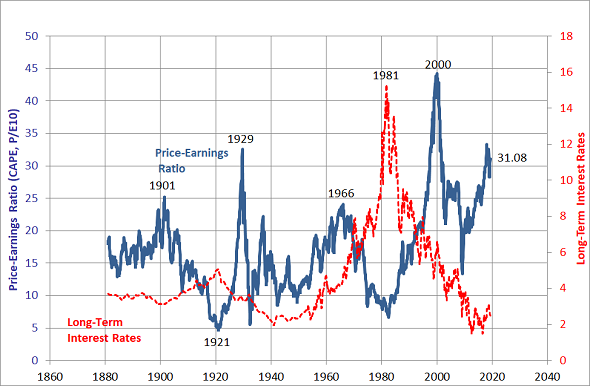