END_OF_DOCUMENT_TOKEN_TO_BE_REPLACED

GOLD PRICES rose Friday, nearing yesterday's 2-week peaks as global stock markets flat-lined, energy prices rose yet again, and longer-term borrowing costs rose to new multi-year highs amid worsening Nato-Russia tensions over Moscow's invasion of Ukraine.
Meetings of the G7 and European Union on Thursday saw the US White House declare a new commitment to preventing Russia from using any of its massive central-bank gold reserves to support the Ruble or finance the Putin government's attack on its western neighbor.
Gold priced in the Dollar today touched $1960 per ounce, while crude oil rose above $120 per barrel of Brent and 10-year US Treasury bond yields jumped towards 2.50% per annum, a fresh 34-month high.
"I don't like gold as an asset, but I am a pragmatist, and the escalation of the war is the reason I am turning to it now," says UK fund manager David Coombs, head of the £1.5bn ($2.0bn) Rathbone Multi-Asset Strategic Growth Portfolio.
Raising that fund's allocation to gold from zero to 1% – and increasing other portfolio positions from 2% to 4% – "I am puzzled at the current price, which really does not reflect the increased macro geopolitical risks we are now seeing," he tells Citywire.
"Given the circumstances, it should be closer to $3000." 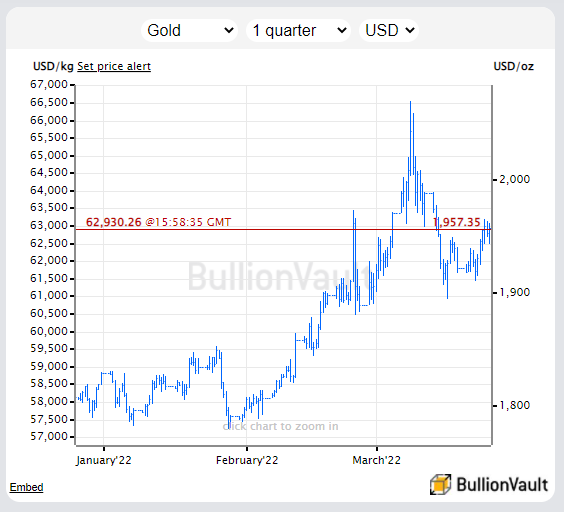 Looking at central-bank policy, "We expect the Fed to raise rates by 50bps in both May and June, and to deliver a 25bp hike at each meeting between July and December," says a gold strategy note from Canadian brokerage TD Securities.
"And yet, gold prices have remained incredibly resilient despite this historically negative scenario...as safe-haven flows have trumped fears of a hawkish Fed, with demand for gold surging in response to the war in Ukraine."
This week saw the giant gold-backed SPDR Gold Trust (NYSEArca: GLD) expand by 0.5%, marking its 7th consecutive weekly inflow, while world No.2 gold ETF the iShares product (NYSEArca: IAU) grew neaely 0.8% with its 4th consecutive weekly addition.
Silver's largest ETF investment trust, the iShares Silver fund (NYSEArca: SLV) also expanded, growing by 0.4% with its 2nd consecutive weekly expansion in the number of shares in issue.
Silver prices today rallied only to fall back, ending the week 40 cents below Thursday's 8-session peak of $25.85 per ounce.
"Russia's giant bullion holdings could, in theory, help finance its war machine if Moscow can find a buyer among foreign banks or governments," says MarketWatch.
"The G7 and the EU will continue to blunt the Central Bank of Russia’s ability to deploy international reserves by making clear that any transaction involving gold related to the Central Bank of Russia is prohibited," said the White House Thursday.
"Our purpose now is to fully disarm its war chest by making sure its foreign reserves serve no purpose in propping up the Russian currency.