END_OF_DOCUMENT_TOKEN_TO_BE_REPLACED

GOLD PRICES erased an earlier rally to head for the lowest weekly close in 3 in London's bullion market on Friday, trading more than 6% below last week's attempt at all-time record highs as global stock markets snapped their steep recovery on news that China may be about to deliver weapons to Russia, defying US-and-European-led sanctions over Putin's invasion of Ukraine.
"EU leaders have very reliable evidence that China is considering providing military aid to Russia," the Politico website quoted a "senior" but anonymous European Union official.
The 27-country bloc "will impose trade barriers" against the world's 2nd largest economy – "the only language Beijing understands" – should the shipments go ahead.
US President Biden was meantime scheduled to tell China's President Xi in a phonecall at 1pm London time that "Beijing will pay a steep price if it supports Russia's military operations in Ukraine," according to Reuters and other media reports.
Crude oil and natural gas eased back and Western government bond prices rose as European stock markets slipped, nudging longer-term borrowing costs down from this week's new multi-year highs as Russia intensified its attacks on civilians and military sites in western Ukraine.
Dollar gold prices held below $1940 per ounce, down almost $40 from last Friday afternoon's bullion benchmarking auction in London.
Gold bullion landed in China – the metal's No.1 consumer nation – had earlier closed the week 2.1% lower from last Friday's finish in Shanghai, fixing at ¥395 per gram.
That was a 13-month high in Yuan terms when reached in late-February on news of Russia's invasion. 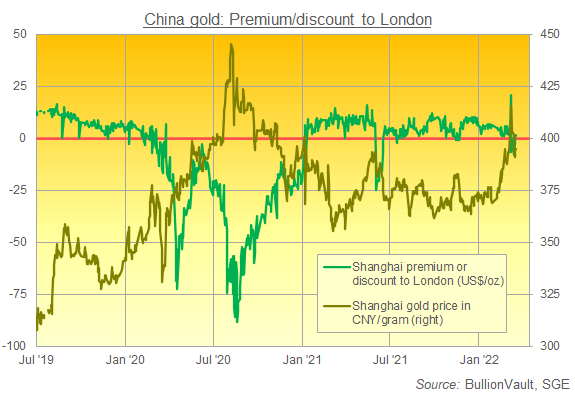 The gap between London and Shanghai gold prices meantime showed a small premium for bullion landed in China around $1.50 per ounce, down sharply from the typical incentive for new imports of $8 and more.
For the week as a whole, Shanghai gold averaged a discount to London of $3.15, actively deterring new shipments out of the precious metal's central trading and storage hub.
"China’s worst Covid outbreak since Wuhan and Putin’s invasion of Ukraine pose new and unpredictable threats to China’s already slowing economy," says Bloomberg, reporting that the country's largest real-estate developers are suffering a 43% year-on-year plunge in new home sales.
Shanghai's SSE share index ended Tuesday more than 15% lower from the end of 2021, hitting its lowest in more than 18 months before rallying 6.1% by Friday's close.
Hong Kong's more internationally-tradable Hang Seng index meantime fell to 6-year lows, trading more than 20% lower for 2022-to-date – and suffering the worst single-day plunge since the global financial crisis of November 2008 – but then regaining over 16%.
Copper and aluminum prices – widely seen as driven by China's industrial demand – also rallied followed a sudden raft of policy shifts from the politburo in Beijing, reversing some of their 8% and 15% plunges respectively from last week's new all-time highs.
"In one single meeting, policymakers addressed all the issues that are causing international investors concerns," says Bloomberg reporter Sofia Horta e Costa, with the Financial Stability and Development Committee – convened by vice-premier Liu He, reportedly the closest advisor to President Xi – vowing to "ensure stability in capital markets, support overseas stock listings, resolve risks around property developers, and complete the crackdown on Big Tech 'as soon as possible'."
With Hong Kong and mainland Chinese equities quickly reversing some of the $1.5 trillion in value lost over the prior 2 sessions, Liu's statement was followed by People's Bank chief Yi Gang, governor of the People’s Bank of China, confirming that the central bank will implement the new policies.
"While there were no details about exactly what the government would do to achieve its pledge," says the Australian Financial Review, "the impact was instantaneous."
"[But] the impact of Liu He's remarks will be shortlived without concrete actions," the Financial Times quotes one chief economist in Hong Kong.
"We feel once again markets are becoming more opportunity rich," says UK fund manager Alex Wright, manager of Fidelity's £2.8bn Special Situations product, after losing 4.7% in February against a 0.5% drop in London's benchmark FTSE All-Share index.
With gold priced in Sterling 9.2% higher for 2022 to date on Friday at £1472 per ounce, the FTSE All-Share showed a loss of 2.7% from New Year's Eve, sharply above the 8.2% loss shown early last week.
Euro gold prices meantime eased back €9 per ounce from an earlier rally to €1760, losing 2.9% from last Friday's new all-time weekly closing high of €1803.
Silver prices also fell to the lowest Friday finish in 3 weeks today, briefly dipping below $25 per ounce.