END_OF_DOCUMENT_TOKEN_TO_BE_REPLACED

GOLD PRICES traded near 1-week highs after rising and then slipping $10 from $1740 per ounce in London trade Thursday, and bullion reached the highest so far in March for Euro investors as longer-term interest rates retreated further from this month's spike after the European Central Bank vowed to raise the pace of its government bond purchases to ensure "favourable financing conditions".
Widely criticized for allowing its weekly bond purchases to slow down amid the recent turmoil in bond markets, the ECB's Governing Council will now buy assets "at a significantly higher pace", aiming to boost bond prices and so cap bond yields "with a view to preventing a tightening of financing conditions that is inconsistent with countering the downward impact of the pandemic on the projected path of inflation."
Ahead of the ECB's March meeting announcement, gold priced in the Dollar this morning extended its rally from Monday's new 9-month low to 3.7% in Dollar terms and to 3.1% in Euro terms from last week's 12-month low at €1411 – a level first reached in December 2019.
Gold priced in Euros rose after the ECB news to 2-week highs at €1450 per ounce. 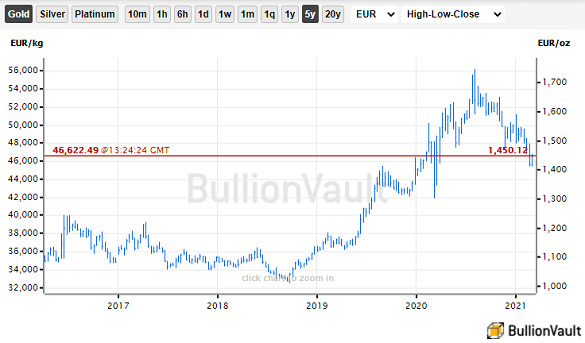 The Euro currency meantime held around 1-week highs against the Dollar after extending its rally to 1.5 cents from Tuesday's 3-month low of $1.18355.
The Dollar also slipped further from Monday's 3-month highs against all major currencies after Democrat US President Joe Biden secured approval of his $1.9 trillion Covid relief and stimulus bill – but with no support from any Republican Senators.
"For a decade after the global financial crisis of 2007-09 America's economic policymakers were too timid," says The Economist magazine. " Today they are letting rip.
"[This] takes the amount of pandemic-related spending passed since [Biden's election victory last November] to nearly $3trn...14% of pre-crisis GDP," with a total of $6trn now "paid out since the start of the [Covid] crisis. On current plans the Federal Reserve and Treasury will also pour some $2.5trn into the banking system this year, and interest rates will stay near zero."
After China's year-on-year deflation in consumer prices came in smaller than analysts forecast, with the No.2 economy's CPI slipping 0.2% rather than 0.4% as predicted, core inflation in the United States was reported at 1.3% per year for February, one tick below Wall Street consensus.
Washington's monthly budget deficit meantime blew past forecast, totalling $311 billion – a new record outside last April-May-June's historic spike.
Back in Frankfurt, and vowing to "recalibrate" the Pandemic Emergency Purchase Program's "envelope" limit of €1.85 trillion if necessary, the ECB is meantime continuing additional support for government bond prices with €20bn per month of spending through its ongoing Asset Purchase Programme, first begun after the global financial and then Eurozone debt crises of a decade ago.
European shares today hit a new 1-year peak ahead of the ECB's statement, recovering almost all of March 2020's one-third crash from all-time highs on the EuroStoxx 600 index.
"The gold market is unwinding its oversold position at present," says Rhona O'Connell at brokerage StoneX.
" Gold's current infatuation with bond yields has seen the price rise on lower-than-expected inflation numbers in the States, but given that inflation is low and unemployment still elevated, this should not come as a surprise."