END_OF_DOCUMENT_TOKEN_TO_BE_REPLACED

GOLD PRICES fell hard Tuesday as world stock markets bounced from yesterday's plunge and government bond prices also retreated, edging long-term interest rates sharply higher from Monday's record lows amid the worsening coronavirus outbreak.
US President Donald Trump meantime demanded yet more rate cuts and QE from the Federal Reserve, ahead of a press conference at which he promised overnight to announce tax cuts and state aid for workers paid by the hour.
The government in Japan today approved a bill enabling Shinzo Abe to declare a "worst case" state of emergency after the Prime Minister was criticized for failing to respond quickly enough to the outbreak of Covid-19 in the world No.3 economy – "most likely" far worse than official estimates say, according to the National Institute of Infectious Diseases.
No.3 European Union economy Italy meantime began its first day of near-total shutdown after Prime Minister Giuseppe Conte extended Sunday's restrictions on north-eastern regionas to the whole country.
"All forms of gathering in places open to the public are prohibited...[with] all organized events...including those of a cultural, recreational, sports or religious character suspended...[whether] in public or private...indoors or outdoors."
Milan's FTSE MIB stock index rallied just 0.5% by mid-afternoon after losing over a tenth of its value on 'Black Monday'.
European stock markets as a whole halved their earlier 4% bounce from yesterday's plunge to 14-month lows on the EuroStoxx 600 index.
Gold priced in the Euro touched a 1-week low at €1452 per ounce, down €100 from late-February's new record high – and down from yesterday's spike to €1500 – as bond yields rose steeply before slipping back.
With 10-year German Bund yields whipping from -0.90% to -0.71% and then -0.80% – formerly the record low of last August's global growth panic – yields on US Treasury also swung higher only to retreat.
Real 10-year rates, adjusted for inflation expectations, currently show a near-record relationship with gold prices, recording an r-squared of 93.2% across the last 52 weeks. 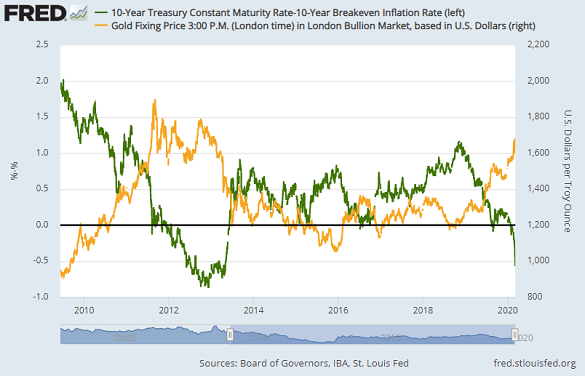 Back in Washington, "Our pathetic, slow moving Federal Reserve, headed by Jay Powell, who raised rates too fast and lowered too late, should get our Fed Rate down to the levels of our competitor nations," said Trump ahead of Tuesday's New York open.
"They now have as much as a two-point advantage, with even bigger currency help. Also, stimulate!"
Trump is also set to announce taxpayer aid for the heavily-indebted US shale oil sector after crude oil sank at its fastest pace since January 1991, bouncing 6% on Tuesday.
Copper meantime rallied 2.8% from Monday's plunge to the cheapest since December 2016, down by 15 cents in the Dollar from January.