END_OF_DOCUMENT_TOKEN_TO_BE_REPLACED

GOLD PRICES fell Wednesday as global stock markets dropped and the bond market priced in a steeper decline in the real value of US Dollars ahead of today's Federal Reserve announcement on monetary policy – its first since Democrat Joe Biden took office as President with a call for $1.9 trillion in new Covid recovery stimulus.
With equity traders in "risk-off mood" amid yet tighter Covid restrictions and worsening cases worldwide, gold prices fell to $1840 per ounce, down $27 from this week's high so far, even as real 10-year US Treasury yields also fell, retreating to minus 1.04% per annum on inflation-protected TIPS bonds.
Down 5 basis points from the end of last week, the real 10-year rate typically shows a strong negative correlation with gold prices, giving an average r-squared of 49.3% on a rolling 22-day view across the last 12 months.
That contrasts with the less meaningful r-squared of 25.9% averaged between gold and real US rates across the previous decade. 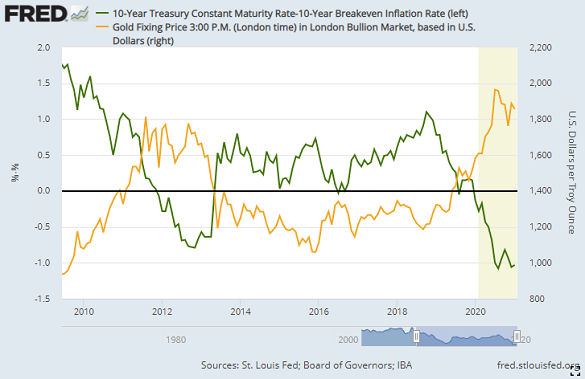 Before accounting for inflation expectations, nominal 10-year yields today slipped to 1.02%, the lowest in over 3 weeks and markedly down from mid-January's peak at 1.15% – the highest since the eve of the global Covid Crisis last February.
"The Fed are going to be extremely careful to avoid a taper tantrum, and that's why I see longer yields anchored," says Jim Cielinski, global head of fund manager Janus Henderson's $105 billion in fixed-income assets.
"The call is another sign of the division on Wall Street over the strength of the so-called reflation trade," says Bloomberg, contrasting investment bank J.P.Morgan's call for 10-year Treasury yield to "almost double as inflation picks up" while other fund managers expect both rates and inflation to retreat.
Inflation in the official US Consumer Price Index ended 2020 at 1.4% per year on the latest data, but the price of inflation-protected US government bonds now implies an annual rate of 2.20% between now and 2026, the fastest 5-year pace since 2013 and higher than the Federal Reserve's former 2.0% target.
2013 saw the Fed start talking about slowing the pace of its quantitative easing bond purchases in February. That was followed by a crash in bond and gold prices in April, even though QE tapering didn't in fact begin until December.
"Fed dovishness challenged by brighter outlook," says a note from Dutch bank ING today, but "Powell will try to keep tapering speculation muted."
But the annual rate of change in US consumer prices could jump to 3% or more in March says investment manager Allianz's Mike Riddell – spurring a crash in fixed-income assets – because of that month's Covid Crash last year in commodities and most especially energy prices, a crash which was swiftly reversed.
"People don't seem to understand the base effects of these year-on-year changes...[but] you can look at what prices were last year, and you can see what's going to happen [to annual CPI inflation] in the next few months.
"We think the market, the economists and investors, will just look at the latest figures and freak out," says Riddell, anticipating a steep sell-off in government bonds and already cutting corporate bonds from their 2020 peak at 80% of his £2.5bn ($3.4bn) fund to just 5% this New Year.
Economists at the International Monetary Fund yesterday raised their 2021 and 2022 global GDP forecasts to 5.5% and 4.2% growth respectively, while also reducing their estimate of last year's historic recession to 3.5%.
"Policy support and vaccines are expected to lift activity," says the IMF, but "renewed waves and new variants of the virus pose concerns and the strength of the recovery is projected to vary significantly across countries."
Worst-hit of all the countries named in the IMF's report, Spain and the UK economies shrank by 11.1% and 10.0% each in 2020, but both are now forecast to rebound faster than other advanced economies except the US.