END_OF_DOCUMENT_TOKEN_TO_BE_REPLACED

GOLD PRICES touched new 1-month highs against all major currencies on Thursday before edging back as global stock markets fell together with commodities and longer-term interest rates amid the worsening wave of Covid-19.
With share prices falling for the 3rd day in a row after setting 5 fresh all-time highs so far this month on the MSCI World Index, agricultural and energy costs also fell back.
That took Brent crude oil down to 1-week lows, now more than 5% beneath early July's 3-year highs, after protests spread across Europe against new restrictions aimed at curbing the pandemic.
Gold priced in the Dollar touched $1833 before retreating $10 per ounce even as US Treasury bonds also rose in price, pushing Washington's 10-year borrowing cost down to 1.32% per annum.
Consumer-price inflation last month hit a 3-decade high of 4.6% on the core CPI measure.
"It is a pretty narrow group of things that are producing these high readings," said US central bank chief Jerome Powell to Congress yesterday, defending the Fed's zero-rate and massive QE policies against a volley of angry comments from both Republican and Democrat politicians.
"We really do believe and virtually all forecasters do believe that these things will come down of their own accord as the economy reopens," Powell went on. "It would be a mistake to act prematurely."
"The market is simply much less fearful [of a rate hike]," says gold-price analysis from Swiss refining and finance group MKS Pamp.
"Yield curve and price action implies there is no taper tantrum (quite the opposite)."
Against that however, "Physical demand/support [is] downgraded from 'tailwind' to 'neutral' given prices are $50 more expensive" since late June.
Gold prices in China – the precious metal's No.1 consumer market – today rose to a 4-week high of ¥380 per gram, but that was behind the rise in global Dollar quotes, flipping the usual Shanghai premium into a discount of $2.30 per ounce after averaging only $3.60 above London prices so far this month.
That's barely 40% of the average incentive for new gold bullion imports prior to 2020's start of the Covid pandemic in the central Chinese city of Wuhan. 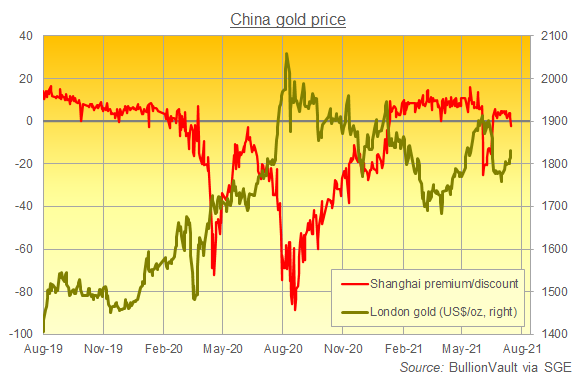 The weak Shanghai premium implies "rather flat/neutral as opposed to relatively stronger demand in June," says MKS.
"Indian and SE Asia [demand] is re-emerging [but] only avid sub $1800/oz."
Indonesia overtakes India as Asia's new Covid-19 epicenter," says a headline today, while a "shortage of vaccines" means 70% of people South Korea are still waiting for their first shot, along with 85% in Thailand and 95% in Vietnam.
Excluding China, GDP across East Asia and the Pacific will now grow only 4.0% this year, the World Bank says, cutting its economic forecasts for the region because "this part of the world is far away from...reclaiming lost freedoms such as going back to work, opening the cinemas and restaurants."
Germany's Dax equity index meantime lost 0.9% today after heavy rains caused floods killing 18 people with 70 more missing in the Ahrweiler district just south of former FRG capital city Bonn.
Spain's Ibex35 index also fell sharply, taking its drop from this time last month to the worst in Europe at more than 7% as regional governments began to re-impose curfews and restrictions against the Delta-wave of Covid.
"Lockdown was absolutely essential, saving 450,000 lives," said the national government of Socialist Workers' Party chief Pedro Sánchez today, responding to Wednesday's court ruling that 'confinement' was unconstitutional, allowing people fined for breaking those rules to seek a refund.
Protests against so-called Covid passports hit yesterday's Bastille Day celebrations in Paris and saw 5,000 people rally in the center of Athens shouting "Take your vaccines and get out of here!" outside the Greek Parliament.