END_OF_DOCUMENT_TOKEN_TO_BE_REPLACED

GOLD and SILVER PRICES rose again on Thursday in London, touching fresh 2-month highs for Dollar and Euro investors as Western stock markets struggled to rally from this week's drop but longer-term interest rates eased back in the bond market ahead of next week's QE and interest-rate policy decision from the US Fed.
Yesterday's gain in precious metals saw only muted inflows to gold-backed ETF the GLD, while the giant SLV silver ETF shrank yet again as bullion rose above $24 per ounce – a price it topped by another 40 cents in London trade Thursday.
With US inflation running at the fastest since the recession of 1982, betting that the Fed will raise borrowing costs 5 times or more this year from the current level of zero has exploded over the last month according to the CME's FedWatch tool, jumping from 8.0% of positions in December 2022 interest-rate futures to 38.6% today.
That's overtaken betting on 4 rate rises, a policy outlook suggested by the Federal Reserve's own "dot plot" forecasts.
The Nasdaq 100 index of tech stocks has meantime fallen on 12 of 22 trading days since this point in December, ending Wednesday in New York 9.2% below its last record high, hit exactly 2 months earlier.
Amid the global Covid pandemic, lockdowns and massive fiscal and monetary stimulus starting New Year 2020, the index had previously set 106 fresh closing highs in 477 trading days. 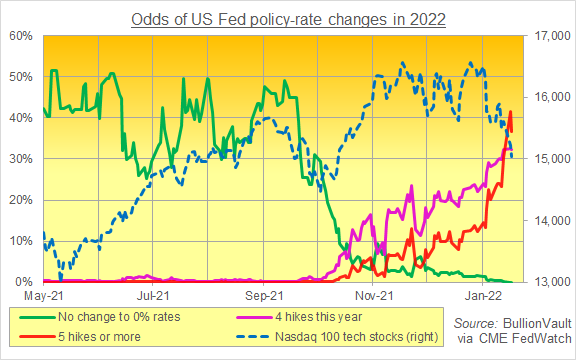 Fears of a "Fed mistake", with the US central bank squashing economic growth by chasing inflation too late, have been growing since June last year, when the US central bank – having slashed interest rates back to zero and engaged in nearly $4 trillion of QE bond purchases since the Covid Crisis began – first suggested it could begin raising rates and reducing its asset holdings in 2022.
The Fed has kept its key rate at 0% since then, despite inflation surging to 4-decade highs above 7%, while adding another $725bn of government and mortgage-backed debt to its balancesheet.
"Given the strength of our economy and the pace of recent price increases, it is appropriate to recalibrate the support that is now necessary," said US President Joe Biden yesterday, calling the task of fighting inflation a "critical job" that "rests with the Federal Reserve."
"We have every reason to not react as quickly and as abruptly as we could imagine the Fed might," said European Central Bank boss Christine Lagarde on French radio today, claiming that inflation is "clearly weaker" in the 19-nation Eurozone than in the USA.
Inflation in the cost of industrial products in Germany accelerated for the 12th month running in December, the official Destatis agency in Wiesbaden said today, jumping to a new all-time high above 24%.
Blowing past the 1974 peak created by the first Middle Eastern oil crisis and also topping the early 1950s' post-war surge, that leap was driven by energy costs, with natural gas up nearly 122% and electricity up 74%.
Five members of Largarde's 25-member Governing Council opposed the ECB'S December policy of leaving rates at minus 0.5% with QE ongoing, minutes from the meeting showed Thursday – "an unusually large group of dissenters for a body that normally strives for consensus," according to Reuters.
Rising today to €1625 per ounce, gold priced in Euros has traded higher than today on only 49 business days, 44 of them in summer 2020 and 5 last November.
The US Dollar gold price in contrast has been higher than today's peak of $1845 per ounce 151 times, 45 of them last year, 98 in 2020, and 8 at the global financial crisis peak of summer 2011.
UK gold prices were meantime less bullish on Thursday, reaching only 2-week highs at £1349 per ounce despite fresh pressure on Prime Minister Boris Johnson to resign over breaking his own Covid lockdown rules amid allegations of "bullying" and "blackmail" against fellow Conservative MPs questioning his leadership.
While the giant US-listed SPDR Gold Trust (NYSEArca: GLD) grew 0.5% on Wednesday to need 981 tonnes of bullion backing, the most since mid-December, cheaper competitor gold ETF the iShares product (NYSEArca: IAU) was left unchanged in size for the 7th session running.
With silver prices yesterday leaping to 8-week Dollar highs, iShares' massive silver ETF (NYSEArca: SLV) meantime shrank for the 4th trading day in a row, seeing net liquidation by shareholders of 0.4% and needing 16,354 tonnes of bullion backing at the close.
That marks the SLV's smallest size since mid-July 2020, almost 1/4 below the record peak of last New Year's #silversqueeze ramp.
"My guess is he will move in, he has to do something," Biden said separately about Russian President Vladimir Putin's troops now massed along the eastern border of Ukraine, remarks which "in no way contribute to defusing the tension that has now arisen in Europe" according to a Kremlin spokesman today.
Russia seized southern Ukraine's Crimean Peninsula in 2014 – spurring international financial sanctions which led to Moscow's central bank buying gold equal to more than 80% of Russia's world No.3 mining output by 2018 – and has now begun massing troops along Ukraine's northern border with Moscow's neighboring ally Belarus.