END_OF_DOCUMENT_TOKEN_TO_BE_REPLACED

GOLD PRICES bounced hard but silver continued to lag near 14-month lows against a rising US Dollar on Thursday, erasing half this week's previous $30 plunge as global stock markets extended their rally but factory activity in global powerhouse China showed its first month-on-month contraction since the Covid pandemic first struck in early 2020.
Euro gold prices broke back above €1500 per ounce, and the UK gold price in Pounds per ounce also showed a gain for the week so far at £1290.
With silver prices now rallying 30 cents for US investors from their lowest since July 2020 at $21.45 per ounce, gold today retested yesterday's new 7-week lows at $1722 – driven down by "higher US bond yields and a stronger Dollar," according to specialist consultancy Metals Focus.
Together that put the Gold/Silver Ratio – a simple measure of the 2 formerly monetary metals' relative prices – at the highest since last November this morning, touching 80 ounces of silver to one ounce of gold on Thursday. 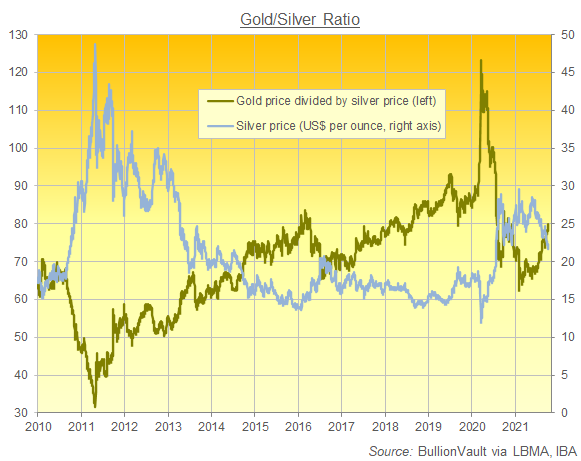 Wednesday's drop in US gold prices saw overall investor holdings in gold's 2 largest ETF products – the New York-listed GLD and IAU trust funds – unchanged from Tuesday.
New York's giant silver-backed SLV ETF also ended the day virtually unchanged in size, despite the gray metal's steep $1 fall.
Trading volumes in Comex silver derivatives in contrast jumped by nearly three-quarters, while gold and platinum volumes both fell.
Silver's price slump has come after hedge funds and other speculative traders in Comex futures and options slashed their net bullish betting to the lowest since June 2019, notes specialist consultancy Metals Focus in its latest weekly report.
For platinum meantime – where the single largest use remains from autocatalysts to reduce harmful emissions from diesel-engine systems – commercial vehicle registrations across the European Union "recorded two consecutive months of decline in July and August," Metals Focus adds, "down by 11.9% and 5.4% year-on-year respectively."
"Global automotive manufacturing has been experiencing supply chain challenges," writes Trevor Raymond, director of research at the mining industry's World Platinum Investment Council, "including the well-publicised global semiconductor shortage.
"We anticipate automakers [will] respond to pent up demand as supply chain challenges ease...There is also scope for vehicle manufacturers to prioritise higher margin products, which are
typically more favourable for platinum demand" versus sister metal palladium, primarily used in gasoline systems.
Inflation in Germany – the largest national economy in the 19-nation Eurozone – quickened to 4.1% per year this month, Destatis said in today's preliminary estimate.
But although the fastest rise in Germany's consumer-price index since December 1993, that pace just missed analysts' consensus forecasts, as did UK house-price inflation on the Nationwide mortgage lender's index, with the average home costing 10% more than September last year.
New US jobless benefit claims also defied forecasts today by showing a rise, not a fall, for last from the week before, while China's official NBS data agency said its PMI index of manufacturing activity came in at 49.6, below the "no growth" level of 50.0 for the first and only time since February 2020's Covid crash reading of 35.7.
$18bn distressed-debt investors Marathon Asset Management said Wednesday they are buying bonds issued by crisis-hit Chinese real-estate giant Evergrande.
Owing some US$305bn in total, Evergrande (HKG: 3333) yesterday missed debt-service payments for the 2nd time a week, Reuters report, "although the cash-strapped company on Thursday made a partial payment to some of its onshore investors."
Dollar-denominated Evergrande bonds due in 2023 and with a 10% coupon sank by almost 1/10th in price on Wednesday to cost less than 24 cents on the dollar.
The People's Bank of China today injected cash into the world No.2 economy's money markets for the 9th session running, adding the equivalent of $40bn net "to main liquidity" ahead of the week-long National Day holidays starting tonight.
" Gold demand in China remains high," says one Asian bullion desk, pointing to bullion prices in Shanghai versus London – heart of the metal's global trading and storage network – with the incentive for new imports slipping only $1 back to $9 per ounce, its long-term historic average, on Thursday.