END_OF_DOCUMENT_TOKEN_TO_BE_REPLACED

GOLD PRICES fell sharply from yesterday's fresh 9-week highs in Asian and London trade Friday, cutting the weekly gain for Dollar investors from 1.4% to 0.6% but heading for the highest weekend close since mid-November as bullion prices held stronger in Euro and UK terms.
Global stock markets in contrast extended this week's drop, knocking the EuroStoxx 600 index down 1.7% to the lowest in a month after New York's S&P500 joined the tech-stock Nasdaq 100 in sinking to the lowest since mid-October.
Longer-term interest rates edged back again from this week's earlier 2-year highs in the bond market, while commodity prices also fell, pulling Brent crude oil $2 below yesterday's fresh 7-year high of $89.50 per barrel.
Silver meantime slipped only 30 cents from Thursday's sudden 9-week high at $24.70 per ounce despite further investor selling out of the giant iShares SLV ETF trust fund, now shrinking for the 4th week in a row as bullion prices have risen 7.5%. 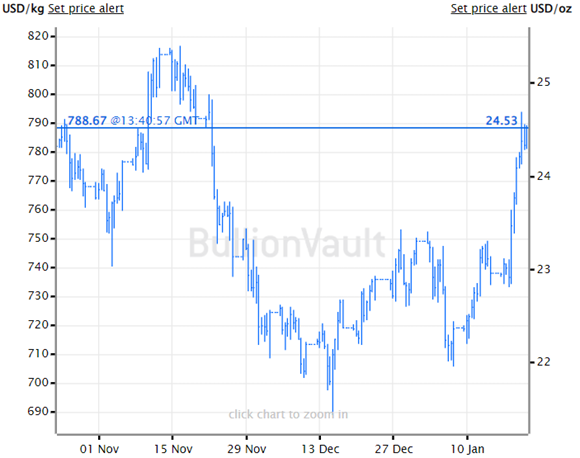 For gold prices, "The Fed's new monetary cycle is now well-discounted," says analysis presented Thursday by metals specialists Rhona O'Connell and Natalie Scott-Gray at brokerage StoneX, noting that "there was no knee-jerk reaction to the December dot plots [forecast].
"Tailwinds including geopolitical risk and persistently negative real interest rates are supportive."
With the Dollar's trade-weighted FX index trading above last week's 2-month low on Friday, the UK gold price in Pounds per ounce showed a 1.5% weekly gain at £1352 as new data said retail sales in the world's 5th largest economy sank 3.6% last month in face of the highest price inflation in 3 decades.
Prime Minister Boris Johnson also faced further turmoil over 'Partygate', with politicians in his own ruling Conservative Party accusing the Government of blackmail and threats following their calls for him to resign.
Euro gold prices meantime held a 1.4% gain for the week at E1618, on track for the highest Friday finish since mid-November's 14-month peak, ahead of consumer confidence data from the 19-nation currency union of 340 million citizens, plus a speech from European Central Bank president Christine Lagarde on the global economic outlook at the WEF summit Davos Agenda 2022.
"The pandemic has not only demonstrated our democracies' ability to act," claimed European Commission president Ursula von der Leyen in a virtual speech to Davos Thursday.
"It has also shown that democracies are the more powerful, the more resilient and the more sustainable form of government."
Iran, Russia and China today began a joint naval drill in the Indian Ocean, while Moscow's foreign minister Sergey Lavrov – following a face-to-face meeting with US counterpart Antony Blinken – told reporters that he expects the US will respond formally next week to Russia's demands that Ukraine, around which Moscow has massed battle tanks and troops, never joins the Nato military alliance.
Moscow has also now told the US to withdraw all Nato troops from all ex-Soviet states, plus former Communist-era allies Bulgaria and Romania – both now members of the European Union as well as the North Atlantic Treaty Organization.