END_OF_DOCUMENT_TOKEN_TO_BE_REPLACED

The PRICE of GOLD reclaimed the $1900 level amid the worsening Ukraine Crisis on Wednesday, showing a gain of almost 4% for 2022 to date as global stock markets rallied from their 9% drop.
The MSCI World Index has now fallen in 22 of 37 sessions so far in 2022, some 59.5% of the time.
That contrasts with 41.7% losing days for global equities between the start of the Covid pandemic and the end of 2021.
Giant gold investment product the SPDR gold ETF (NYSEArca: GLD) was unchanged in size overnight, holding at its largest since August after expanding by 5% since New Year's Eve.
Net selling meantime continued on BullionVault, with private investors now liquidating 0.8% of their 47.5-tonne holdings since New Year as gold prices set multi-month and multi-year highs.
Trading volumes in Comex gold futures and options in contrast jumped 65% yesterday from Monday's level as the US, EU and UK imposed fresh sanctions on some Russian oligarchs and businesses, reaching the highest level in 4 weeks. 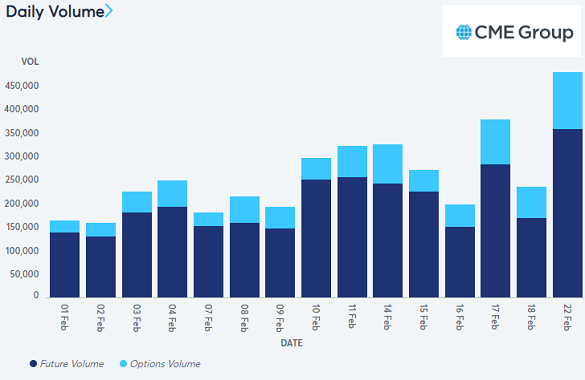 "Peace and freedom in Europe don't have a price tag," said Germany's foreign minister Annalena Baerbock today at a joint press conference with French counterpart Jean-Yves Le Drian, commenting on Berlin's decision to suspend work on the controversial Nordstream gas pipeline from Russia.
"We accept the economic consequences for a democratic, sovereign and free Ukraine...now that Putin has smashed the Minsk agreement."
European natural gas futures for April rose over 10% for the 2nd day running on Wednesday, reaching the highest cost so far this month, but crude oil edged back by $5 per barrel of European benchmark Brent from an overnight high near $100.
That was the most costly since September 2014, back during the Russia-Ukraine crisis which saw Moscow annex the Crimea.
Russia produces over a tenth of global crude oil output and around 1/3rd of natural gas supplied to Europe.
The price of wheat – global exports of which Russia and Ukraine account for 29% between them – meantime reached 3-month highs, also near the most costly since 2014.
After the central bank in Hungary raised its key interest rate Tuesday to 3.4% in the face of 7.9% annual inflation, the Reserve Bank of New Zealand today raised its key rate for the 3rd time since October, reaching 1.0% as the cost of living rises by 5.9% per year.
"The risks to the outlook for inflation have increased and continue to be on the upside," said the Magyar Nemzeti Bank in Budapest yesterday, pointing to "persistently high" commodity and food prices.
Moscow's stock market was shut Wednesday for the national Defender of the Fatherland commemorations after turning yesterday's initial 10% loss into a 1.5% gain by the close.
With Russia's bond prices falling, the yield offered by Moscow's $7 billion in 40-year Dollar-debt issued in 2017 reached a lifetime high above 6% per annum.
"The EU is set to prohibit the purchase or sale of 'transferable securities and money-market instruments issued' by Russia," says Bloomberg, citing draft documents.
With gold prices edging up within $3 of yesterday's new 9-month high near $1914 per ounce, silver today reached 4-week highs at $24.45.
Platinum rose within $10 of last week's 3-month highs at $1098, and the price of palladium – of which Russia is the No.1 miner – jumped to the highest since September as Western nations imposed and discussed still further sanctions against Moscow over its recognition of and troop movements into Ukraine's north-eastern Donbass and Luhansk regions.