END_OF_DOCUMENT_TOKEN_TO_BE_REPLACED

GOLD PRICES struggled to show any change for the week so far Thursday afternoon in London, erasing yesterday's $30 pop as government bonds resumed their plunge, driving longer-term interest rates higher despite the US Federal Reserve vowing to continue its zero-rate and massive QE policies in the face of surging inflation expectations.
The Fed's policy committee yesterday cut its forecasts for unemployment and raised its forecasts for GDP and inflation, but kept its key interest rate forecast at 0.1% for at least the next 3 years.
Gold prices initially jumped on the news, nearing 3-week highs in Asian trade at $1755 per ounce overnight before giving it all back as bond yields suddenly spiked at the start if European hours.
Commodities fell across the board as market-based borrowing costs rose, and crude oil sank 2.4%, losing over $5 per barrel from last week's 14-month high.
Asian and European stock markets rallied in contrast after what analysts and pundits agreed were "dovish" comments from the Fed and its chair Jerome Powell.
But US equities dropped as New York opened, with the tech-heavy Nasdaq 100 index losing another 1.7% to fall for the 11th of the last 21 sessions and dropping 6.0% from mid-February's current all-time high. 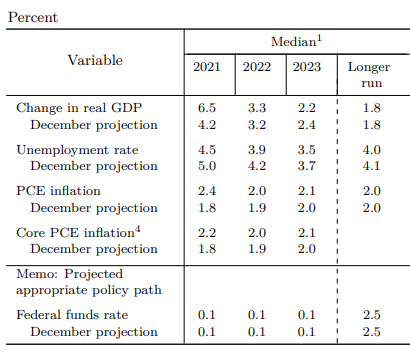 Agreeing that consumer prices may rise as the economy re-opens, "You can only go out to dinner once per night," Powell said in a press conference after the March meeting, predicting that any rise in inflation will be temporary.
Yet while vowing to keep the Fed Funds rate at 0.1% until the start of 2024 or beyond, the FOMC now says that annual inflation on the 'core' PCE measure – last reported at 1.5% for January – will reach 2.2% this year.
That annual pace of inflation has not been touched in any month since summer 2008, when oil prices hit a record $150 per barrel just before the collapse of Lehman Brothers marked the "crash" phase of the global financial crisis.
It would also put the Fed's real interest rate down at minus 2.0%, marking the deepest loss of purchasing power in cash savings since New Year 2012.
On a 12-month basis, the Dollar price of gold has gone in the opposite direction to the real Fed Funds rate nearly 56% of the time over the last half-century.
Over the last decade that connection rises to 72.5% of the time. 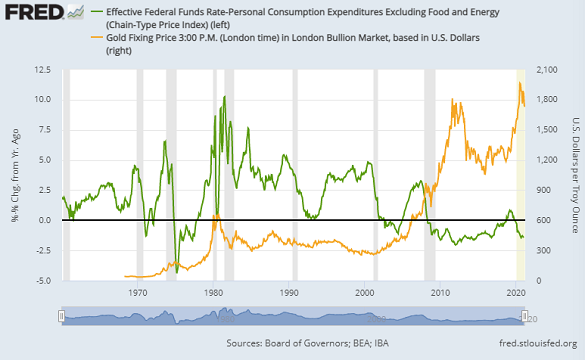 As government bond prices fell further worldwide Thursday, driving borrowing costs to new multi-month and multi-year highs, the gap between 5-year US Treasury and 5-year inflation-protected TIPS yields jumped to 2.72%, a "breakeven" rate of inflation last "forecast" by the bond market back in summer 2008.
"With real yields and the US Dollar expected to strengthen further," says a trading note from Swiss bank Credit Suisse, "we view the current bounce [in gold prices] as temporary and we look for a fresh fall to $1670 next, then $1620/15."
"We see downside as investment demand weakens further while rising physical demand in China and India provides an offset but fails to keep pace."
"The behavior of gold in the first quarter lends credence to the importance of real yields," agrees German financial group Deutsche Bank.
"While the initial rise in nominal yields was neutralized by higher inflation expectations, steepening [then] outstripped reflation...[and now] has potential to sustain the gradual unwinding of investment accumulation since early 2020, now about 1/3 of the way through."
Both of gold's largest ETF trust funds saw small outflows on Wednesday, with shareholders liquidating another 0.2% of the giant GLD gold ETF – now back to its smallest since spring last year – and cutting the IAU product to its smallest since end-August 2020.
But while China and India – gold's top 2 consumer markets – continue to show strength, with local prices rising to solid premiums above global quotes, "another physical market is getting hotter," says a note from the precious-metals team at BNP Paribas, pointing to the loco Zurich gold market, where prices have risen to $0.25 per ounce above London, heart of the world's trading and storage network.
"Switzerland is the largest gold-refining hub in the world," says BNP, and "demand from local gold refineries [for recasting into kilobar and other 'retail' investment products] seems to be un-extinguishible."
With new US president Joe Biden now set to launch $1.9 trillion in fiscal stimulus, "The recovery has [already] progressed more quickly than generally expected," said Chairman Powell in his post-decision press conference.
The Fed used the word "inflation" ten times in yesterday's 437-word statement, the same as in January and once more than its December announcement.