END_OF_DOCUMENT_TOKEN_TO_BE_REPLACED

GOLD PRICES rallied again in Dollar terms on Thursday as the US currency extended its retreat from 2-decade highs on the FX market, nearing yesterday's 1-week highs above $1660 per ounce but erasing the last of this week's earlier spike to all-time record highs against the British Pound following the Bank of England's emergency intervention in UK government bonds.
Energy prices split, with crude oil rising again but European natural gas reversing Wednesday's 8% jump as No.1 regional economy Germany announced a €200bn price-cap package for household and business bills this winter, funded by new government debt.
The undersea gas leaks from the Nord Stream pipe in the Baltic Sea "look like an act of terrorism, possibly on a state level" said a Kremlin spokesman today, defying Western European and Ukrainian government claims that Russia is behind the damage.
Western stock markets meantime fell hard, pulling the MSCI World Index lower for the 14th in September's 20 sessions so far, while German and other major government bond prices also fell, edging longer-term borrowing costs up to new multi-year highs.
The UK central bank today bought £1.4bn of UK government bonds after buying £1.0bn at Wednesday's auction – well below its emergency program's £5bn upper daily limit – to stem the chaos in Gilt prices following last Friday's "mini budget" from new Chancellor Kwasi Kwarteng.
Like yesterday's launch, Thursday's BoE purchase saw prices for 30-year Gilts – the main target of the Bank of England's intervention – hold firm to keep the yield offered to new buyers, as well as the likely borrowing cost for the UK government when it next issues such debt, around 4.0% per annum, sharply below Wednesday morning's 2-decade peak above 5.1%. 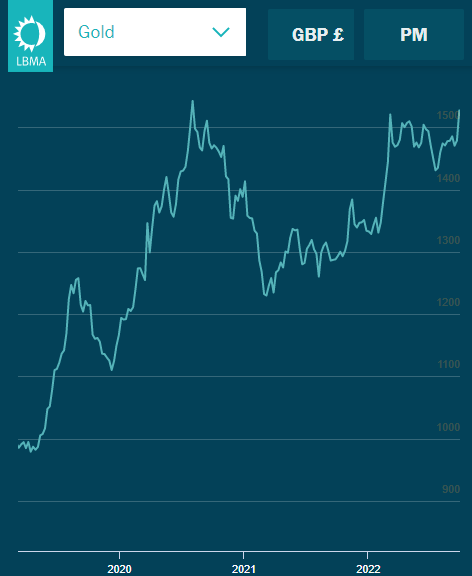 Having re-touched the all-time record of £1580 set in summer 2020 and March 2022 in spot trade on Monday, the UK gold price in Pounds per ounce yesterday afternoon fixed at London's official benchmarking auction at £1547, a level topped before on only 5 days.
But with the Pound today rallying 7 cents from Monday's new all-time low to the Dollar, gold in Sterling on Thursday fell back to £1500.
Thursday's energy-price cap plans in Germany meanwhile came as the nation's power regulator said gas demand remains far too high in the Eurozone's No.1 economy, urging a 20% reduction to avoid an emergency.
Gas-fired electricity generation in the UK – where the Government's energy-price cap scheme accounts for 83% of the additional £72bn in new borrowing needed between now and April announced last week – meantime peaked Thursday morning at the highest since April, a level not reached last autumn until early November.
"Despite sky high prices, were are burning still lots of gas for electricity," says Bloomberg reporter Javier Blas.
"Energy prices have to go down," said Germany's Chancellor Olaf Scholz, head of the SPD party in the country's 'traffic light coalition' government, as the price of gold bullion for Euro investors held unchanged for the week so far around €1700 per ounce.
Separate data yesterday said that the US trade deficit in goods shrank to an 11-month low in August, extending the retreat from January's record $126bn to total $87bn.
Home sales pending in August also pointed to a fast-weakening economy, plunging 2.0% from July and down by almost 1-in-4 from the same month last year.
"In the earlier era, the quantitative easing era, foreign central banks said they were surprised by Fed action and they were not sure what our policy was and this was feeding back to them," Bullard said, in a livestreamed discussion sponsored by HSBC.
"I think we've made it clear and we've been forthright," said 2022 voting US Federal Reserve member James Bullard of the St.Louis branch today when asked in the light of the UK turmoil if the Fed's repeated rate rises had surprised foreign central bankers and upset financial markets.
"This has helped us a lot this year to limit the sorts of disorderly adjustment that might otherwise occur."