END_OF_DOCUMENT_TOKEN_TO_BE_REPLACED

GOLD BULLION priced in Dollars fell on Thursday through its post-Covid floor of $1680 per ounce, dropping to its lowest since May 2020 after gold-backed ETF funds the GLD and IAU continued to shrink and global stock markets extended their drop amid inflation-driven forecasts for further steep interest rate hikes to come.
With major government bond yields rising to new multi-year highs, yesterday's late rally in US stock markets failed to prevent the MSCI World Index of global equities from recording its 13th daily loss of the last 20 sessions on Wednesday.
Today's New York opening found the index slipping once more with European bourses losing 0.3% to hit 1-week lows.
Setting what technical analysis calls a "double top" above $2000 per ounce in August 2020 and then March 2022, the Dollar price of gold bullion had fallen to $1680 four times over the last 18 months ahead of today.
Gold's steep 2013 crash began in April that year when the Dollar price failed to hold the $1535 level at the 5th time of asking, led by what analysts at the time called "heavy fund liquidation". 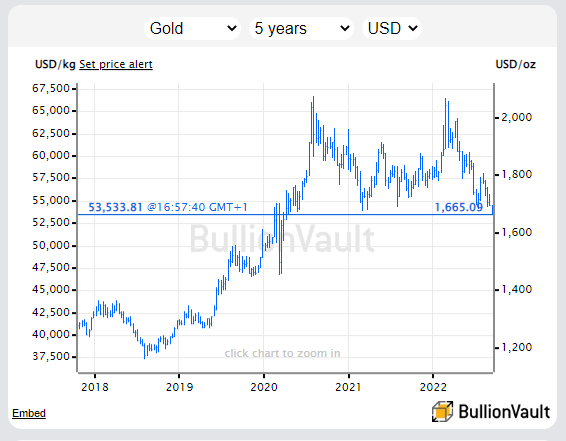 Yesterday saw the giant GLD gold ETF shrink for a 5th session running, with investor outflows taking the number of shares in issue to the lowest since late-March 2020, down 25% from its peak of October that year.
The smaller iShares IAU product is also on track for a 5th consecutive month of net liquidation, shrinking 0.7% so far in September and needing 7.5% less bullion to back its shares in issue than the record peak of November 2020.
The gold price crash of 2013 saw the GLD and IAU liquidate over 600 tonnes of bullion as shareholders dumped those gold-backed trust funds.
The total 2013 outflow from all gold ETFs – equal to nearly 30% of that year's global gold-mine output – was matched almost exactly by the jump in global jewelry, coin and small-bar demand.
Dollar prices still fell 27.3% across the year however, the worst plunge since steep US interest rate hikes helped turn the tide of runaway inflation in 1981. 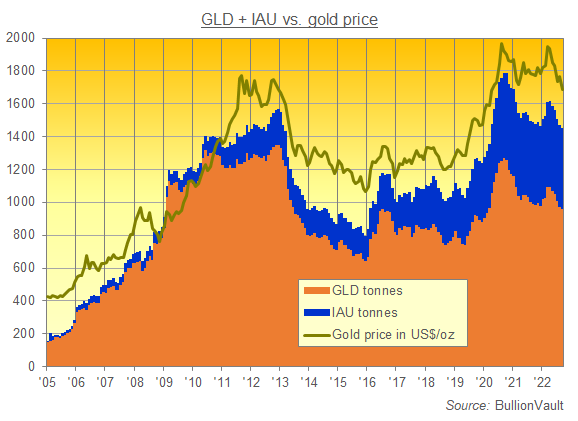 "XAU/USD is poised for a big breakdown on big Fed rate-hike bets," said a technical analysis from data and news site FX Street earlier on Thursday.
"The yellow metal looks overvalued against a backdrop of rising real yields," agreed analysts at US investment bank Morgan Stanley, pointing to still-very-negative but rising global interest rates after you account for inflation.
One-in-5 trader positions in US interest-rate futures now backs a full one percentage point hike from the Federal Reserve in next Wednesday's decision, down from yesterday's peak of 1-in-3 but up from zero on Monday, eve of the stonger-than-expected August inflation data.
Alongside the giant US-listed GLD and IAU gold ETFs, Europe's 89 listed gold ETC products also shrank in size last month according to data compiled and published by the mining industry's World Gold Council, needing 0.6% less bullion from end-July.
Asia's 33 such gold investing products saw outflows smaller by weight but larger by proportion, shrinking their bullion holdings by 5.7% in August.
Gold priced in non-Dollar currencies also fell today, dropping to 6-week lows at £1450 in UK Pounds and hitting new 8-week lows at €1665 for Euro investors.
Silver prices were firmer, trading 3.4% higher for the week so far at $19.20 per ounce.