END_OF_DOCUMENT_TOKEN_TO_BE_REPLACED

GOLD PRICES jumped to 2-week highs in Asian and London trade Thursday, gaining 1.2% for the week so far as the Dollar slipped but global stock and commodity markets rose sharply following yesterday's apparently "dovish" monetary policy statement from the US Federal Reserve.
"Stronger risk appetite across markets," says a trading note from Swiss refiners and finance group MKS Pamp.
"Precious metals are capitalising on the softer greenback...with the [Shanghai] premium firmer at $3-$4.50 per ounce" – around half the typical incentive for new bullion imports to China, the No.1 gold consumer market.
Gold priced in the Euro meantime reached 1-week highs at €1539, up 0.5% from last Friday, after new data said inflation in Germany – the 19-nation currency union's largest economy – has hit 3.8% per year in July, the fastest since 1996.
"Powell's press conference was a calming one," says bullion, commodities and equities broker StoneX in a note from precious-metals specialist Rhona O'Connell, "demonstrating a pragmatic approach with eyes firmly on the longer-term horizon.
"[While] this month's statement suggests that tapering may be closer on the horizon, there was no suggestion that it is imminent."
"In fact," adds Bloomberg columnist Lisa Abramowicz, "if you take a cue from [the bond] market, traders seem to think free money will keep flowing for even longer than they did before the meeting." 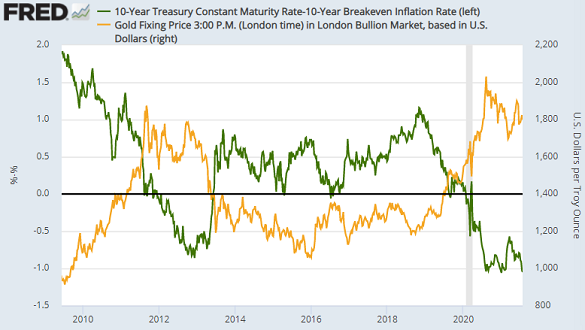 Major government bond prices slipped Thursday after the German inflation news and US Fed statement.
But while that edged 10-year US Treasury yields up to 1.27%, the real yield implied by inflation-protected debt sank to new all-time lows at minus 1.17% per annum.
That put the annual pace of inflation implied by the gap between conventional and TIPS yields at 2.43% over the next 10 years, the highest such 'break-even' rate in 8 weeks.
That was still 11 basis points below mid-May's 8-year high of 2.54% and – despite actual US consumer prices rising in June at the fastest pace since 1991 – also 31bps below the series peak of 2.76% from 2004.
"You're in good company if you can't figure out why US Treasury yields are tumbling," says another Bloomberg column.
"Jerome Powell isn't sure either," telling journalists at yesterday's Fed press conference that he sees "no consensus" for why longer-term interest rates have fallen in the face of multi-decade highs for inflation.
Touching $1828 per ounce, the Dollar gold price turned this week's earlier $10 drop - reached seconds before the Fed released its July statement - into a $20 rise so far.
Silver also jumped following the US central bank's latest "no change" decision, regaining $1 per ounce from Tuesday's near 4-month low of $24.50 per ounce.
That pulled the Gold/Silver Ratio – a simple measure of the two former monetary metals' relative values – down to 71.5 from Wednesday lunchtime's new 6-month peak of 72.5
Crude oil meantime led a rise in industrial commodities, with European Brent rising back above $75 per barrel as platinum rallied to $1080 before falling back $10 per ounce.
On the stock market, the EuroStoxx 600 index rose 0.5% to set a fresh all-time high while China's stock market closed Thursday 3.3% higher after the world No.2 economy's financial watchdogs held a conference call with senior global investor managers, seeking to reassure them about the Communist dictatorship's lurch into sudden and strict regulatory crackdowns, most recently on private-tutoring companies this week.
"There were about 12 attendees," reports the Financial Times, quoting un-named sources, "including executives from [global investment giants] BlackRock, Fidelity, Goldman Sachs and J.P.Morgan."