END_OF_DOCUMENT_TOKEN_TO_BE_REPLACED

GOLD PRICES sank below $1800 per ounce in London on Thursday, extending its 7th worst-ever trading day after the US Federal Reserve spooked the bond, equity and commodity markets by signalling an earlier rise in interest rates than previously forecast, leading in turn to expectations that its QE bond-buying will start to 'taper' sooner than later.
Silver prices also sank to sudden 6-week lows, losing over 5% to touch $26.23 per ounce, while platinum fell through $1100 for the first time since start-February.
Losing over $50 per ounce at this morning's London benchmark from Wednesday afternoon's pricing, gold has dropped harder only 6 times in the last half-century – two of them immediately after its January 1980 peak and 2 in spring 2013's historic crash.
Starting from yesterday's level of $1860 however, Thursday morning's fall didn't come inside gold's 100 worst daily drops on a percentage basis.
Asian stock markets meantime followed New York lower overnight, while European shares were more mixed but crude oil and base metals led a steep fall in commodities as gold prices fell to $1790, the lowest since 6 May.
Major Western bond prices also fell hard, driving borrowing costs for the German and UK governments 8 basis points higher, while Australia's 10-year bond yield jumped by more than 0.1 percentage point.
US Treasury bonds steadied after sinking on the Fed's latest policy statement and projections, news which saw the inflation-adjusted 10-year TIPS yield spike by 0.12 percentage points.
That's the 7th sharpest jump in real rates of the last half-decade. 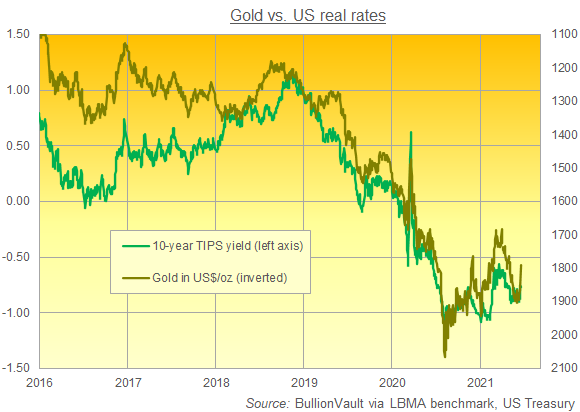 The Fed's policy statement was almost entirely unchanged from April's, leaving overnight interest rates at 0% with $120 billion of new QE bond purchases per month and no mention of tapering, while repeating that "risks to the economic outlook remain" but now noting that vaccinations have reduced the spread of Covid.
The Fed's wording also changed to note that inflation – instead of "running persistently below" the central bank's target – had previously run below 2.0% per year.
But it made no mention however of the 3-decade blow-out in core CPI to 3.8% reported for May.
The Fed's economic projections were also little changed, with the June 'dot plot' predicting slightly higher GDP growth for 2021 and 2023 than its previous forecast from March, plus slightly lower unemployment for 2022.
But inflation across 2021 will now reach 3.0% on the core PCE measure – sharply higher from March's 2.0% forecast – and while interest rates still won't rise until 2023, the Fed now predicts a rate of 0.6% that December, suggesting 2 policy hikes that year, rather than one.
"Gold was crushed by a more hawkish Fed," Reuters quotes one spread-betting bookmaker's analyst.
"The change in the Fed's script had benefited the Dollar and Treasury yields rather than precious metals in the immediate term," agrees a futures broker.
Shanghai gold prices also sank overnight but less quickly than global Dollar quotes for London settlement, helping slash the recent $10 per ounce discount to below 50 cents and suggesting a rise in gold demand in the metal's No.1 consumer market.
Last night in New York the giant SPDR Gold Trust (NYSEArca: GLD) – the world's largest gold-backed ETF – expanded by 0.1% for the day, reaching its largest size so far this month on net investor inflows.
While cryptocurrency Bitcoin held little changed overall meantime on Thursday, so-called stablecoin Titan sank from $65 each to $0.000000035 overnight after chatroom rumors said sports billionaire and crypto evangelist Mark Cuban was 'pumping and dumping' the token, a claim he denied.
"[The crash] was a crypto vortex of money," Coindesk quotes one pundit.
Gold and silver prices for non-Dollar investors also sank Thursday despite a rise in the US currency's FX value, with the yellow metal hitting £1280 per ounce for UK buyers and falling through €1500 for Eurozone investors.