END_OF_DOCUMENT_TOKEN_TO_BE_REPLACED

The GOLD PRICE erased earlier gains once more on Thursday in London, trading flat for the week so far against a weak US Dollar and dropping near multi-month lows for Euro and UK investors as betting in the forex market foresaw European monetary policy tightening faster than previously expected while the Federal Reserve also continues to hike US rates.
After yesterday's release of US Fed meeting notes confirmed that a run of half-point hikes are likely to follow this month's move, the Dollar slipped almost 3% below its 20-year high of just 2 weeks ago on a trade-weighted basis against the rest of the world's major currencies.
The gold price in Dollar terms still fell back $10 per ounce from today's Asian session high to trade at $1843.
The UK gold price in Pounds per ounce meantime sank and bounced from £1460 while Euro gold prices again tested €1720, the lowest since end-March. 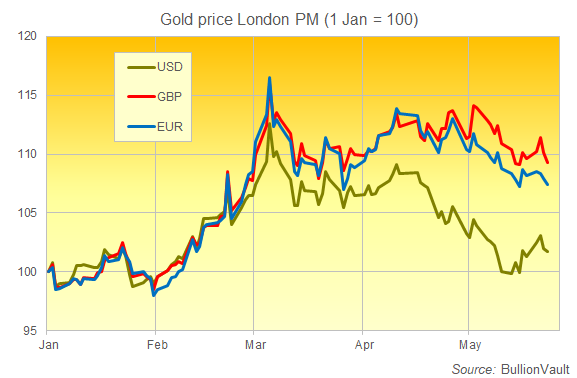 European Central Bank chief Christine Lagarde "announced a tighter course in monetary policy" at the start of May, says German financial newspaper FAZ, doubling down with 2 more 'hawkish' comments already this week.
A steep drop in house prices, driven by a rise in interest rates, is now one of the "main risks" facing the 19-nation Eurozone's economy according to the ECB's own twice-yearly financial stability review, published yesterday.
"Why are there so many calls for the ECB to hike rates, even as the Eurozone economy is falling into recession?" asks Robin Brooks, chief economist at financial industry association the Institute of International Finance.
"On the surface, this is about inflation, but beneath all that there's growing frustration in northern Europe that Italy's debt overhang hopelessly muddles ECB policy."
Now led by former ECB chief Mario Draghi as prime minister, Italy "is facing vulnerabilities relating to high government debt and weak productivity growth," said the European Commission on Monday, dogged by "excessive imbalances...fragilities in the labour market, and some weaknesses in the financial markets."
Rome this week borrowed €5 billion in new 15-year debt from the bond market at a yield of 3.3%, the highest since early 2019 and sharply above comparable German Bund yields of 1.2%.
With average 30-year mortgage rates in the US meantime rising to the highest since 2009 above 5.2% per annum, April saw US sales of new homes sink almost 17% in April from March – down to the fewest since the first wave of the Covid Crisis in spring 2020 – data from the Department of Housing and Urban Development said Wednesday.
Longer-term US and European interest rates ticked higher Thursday in the government bond market, while US stock-market futures pointed higher as European bourses also rallied.
Energy prices continued to rise, with Brent crude rising towards $115 per barrel, the resistance level tried 3 times since the European oil-price benchmark spiked and then sank around the start of Russia's Ukraine invasion.
An EU-wide ban on Russian oil imports "would run the serious danger of dismantling European unity," said Peter Szijjarto – foreign minister of Hungary, which gets 85% of its gas and 65% of its oil supply from Russia – on Wednesday.
Despite Western sanctions and a deep market discount for Urals Blend crude oil, Russia is currently enjoying record current-account surpluses thanks to high commodity prices, reaching the equivalent of $95.8bn so far in 2022.
UK finance minister Rishi Sunak today confirmed he will levy a "windfall tax" on oil and gas companies – a major policy U-turn urged by opposition parties since November – raising £5 billion ($6.3bn) to fund both targeted and universal 'cost of living' support for UK households.