END_OF_DOCUMENT_TOKEN_TO_BE_REPLACED

GOLD PRICES steadied Friday above new 9-month lows of $1690 per ounce, bouncing back above $1700 but losing 2.0% for the week and trading back where it was on the eve of the Covid pandemic as a broad sell-off across financial markets was blamed on US Federal Reserve chairman Jerome Powell apparently accepting the steep rise in longer-term interest rates.
New US jobs data came in much stronger than analysts forecast on the government's Non-Farm Payrolls estimate.
Separate figures said the US trade deficit in goods and services rose 1.9% in January, swelling within $1 billion of November's record $69bn gap between what the No.1 economy bought from and sold to the rest of the world.
Crude oil prices meantime spiked to their highest since before the Covid pandemic broke out of China last New Year, nearing $70 per barrel of Europe's benchmark Brent after the Opec+ cartel of producer nations agreed to keep output limits in place until April.
"Powell Confirms Fed to Maintain Easy-Money Policies," says a headline at the Wall Street Journal, which interviewed the US central bank chief live online yesterday.
US equities sank during Powell's interview, extending the broad S&P500's loss to 3.0% from this time last month while the tech-heavy Nasdaq – the big winner during 2020's Covid pandemic lockdowns – has now dropped almost 10% from mid-February's all-time record high.
"Powell signals he's not riding to the rescue just yet," says MarketWatch.
"Fed's Powell ' not dovish enough' with inflation comments," says CNBC, quoting a UK stock broker.
"Markets slide as Fed chair's comments hit stocks and bonds," say headlines elsewhere.
Thursday's late plunge meantime silver has now erased all of its Reddit Ramp to $30 per ounce at the end of January, while platinum has fallen back to where it traded before the metal's No.1 mining nation South Africa was hit by power cuts from state-owned energy monopoly Eskom in February.
Gold has meantime erased all of the 22.8% gains made since the Covid Crisis began to take hold 12 months ago this week. 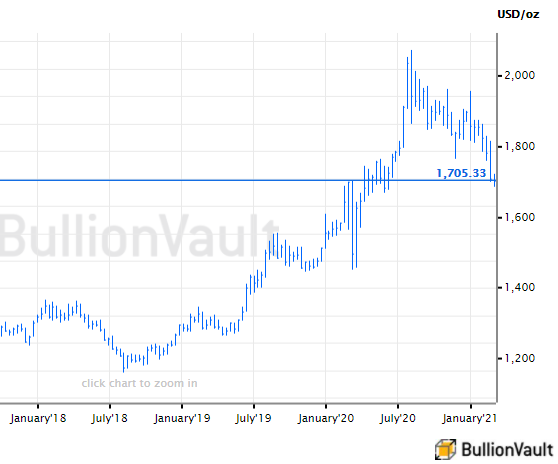 "As it relates to the bond market," said the Fed's Powell in his WSJ interview Thursday, "I would be concerned by disorderly conditions in markets or by a persistent tightening in financial conditions broadly that threatens the achievement of our goals."
That statement has been widely taken to mean the Fed does not believe the market is disorderly at present.
As for reducing QE or raising rates from the current 0%, "We'd want to see inflation sustainably above 2%," the Fed chairman said, repeating the stance taken by other Fed officials this week, "and we'd want to be on track for inflation to run sustainably above 2%.
"There's just a lot of ground to cover before we get to that" – including full employment, as demanded by the Fed's official mandate.
Contrary to Wednesday's private-sector ADP Payrolls report, the US economy added 379,000 jobs last month according to the Bureau of Labor Statistics, blowing past analyst forecasts by almost 200,000 instead of missing them by 60,000.
"Although inflation is becoming a theme, gold is struggling," Bloomberg today quotes a Dutch portfolio manager who sold his fund's gold exposure in late November, after the Pfizer vaccine announcement knocked prices sharply lower.
"The recent [up] move in US yields was also mainly driven by real [inflation-adjusted] yields moving up, not really by break-even inflation. That's not helping gold prices."
Inflation forecasts in the US bond market rose today near mid-February's 2014 level at 2.24% per annum on 10-year breakevens.
Ten-year interest rates meantime rose to their highest since February 2020 at 1.60% on Treasury bond yields.
Asian stock markets fell further on Friday, but European equities reversed early losses as New York opened with a bounce from yesterday's drop.
Silver prices rallied 25 cents from the first dip below $25 per ounce since 28 January.
Fellow 'industrial' precious-metal platinum bounced $12 per ounce to $1123, heading for its cheapest Friday finish in four.
Investment liquidation continued Thursday across precious-metals' 3 largest US-listed ETF products, with the giant GLD gold ETF and its smaller IAU competitor both shrinking 0.4% as the SLV silver trust shrank by more than 1%, heading for its 4th consecutive weekly outflow.
The GLD and IAU gold-backed ETFs are now at their smallest since early May and start-September respectively.
Silver's SLV is now the smallest since end-January, when a call to "Buy the SLV and f**k the banks" took hold on social media.