END_OF_DOCUMENT_TOKEN_TO_BE_REPLACED

GOLD PRICES spiked lower and then bounced back to $1770 in London trade Tuesday, heading for the worst monthly loss against the US Dollar since Donald Trump won the White House almost 5 years ago and defying a typically strong relationship with inflation-adjusted interest rates.
Gold from 2016-2020 displayed a 1-month correlation with 10-year TIPS yields of minus 0.65, a strongly negative relationship which saw gold prices rise as real interest rates fell and vice versa.
Gold's long-term correlation has however weakened to -0.39 in June 2021, having touched +0.57 earlier this month – the most atypical reading since last Christmas's 2-year highs of +0.64
While 10-year real rates are now unchanged from the end of May at -0.86%, the price of gold has lost over 7.1%, its steepest monthly drop since November 2016. 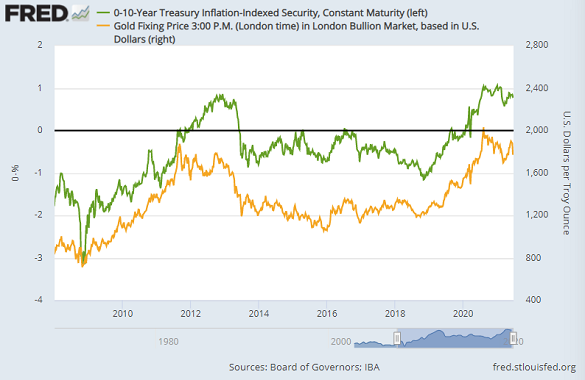 Indeed, real 10-year interest rates have now fallen by 0.1 percentage points across the last 2 weeks, 10 times the size of their typical fortnightly move across the last half-decade.
Gold prices have in contrast fallen by $100 per ounce.
"There's [also] a close/strong correlation of +0.72 the past 5 years between flows and price performance," says Nicky Shiels, head of metals strategy at Swiss refining and finance group MKS Pamp, pointing to gold ETFs and Comex speculative betting.
Last week saw speculators in Comex futures and options slash their bullish gold bets by one-third.
The giant GLD gold-backed ETF expanded for the 1st time in 6 sessions on Monday, growing by 0.3% on net investor inflows.
"[But] using a simple regression, gold's recent -4.3 million-ounce biweekly purge should have only resulted in a 2% drop.
"This is clearly an (unfair) overshoot which highlights some muted physical support form the East." 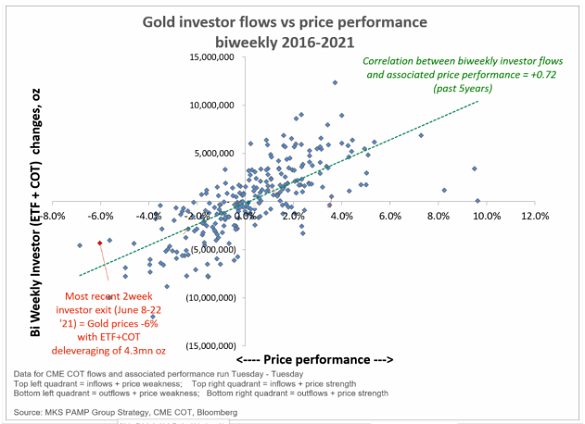 "There has been some substantial bargain hunting in the Far East," counters Rhona O'Connell at brokerage StoneX, "and Shanghai prices remain at a premium to loco London", suggesting solid demand over supply in China, the metal's No.1 consumer nation.
Demand in No.2 consumer India "is still sluggish," O'Connell adds, "although as the lockdown eases there we should start to see some fresh interest. [What's more] the monsoon forecast currently is that the rains will be 101% of the long-term average and will be well-distributed, which should point to a good harvest.  This in turn leads to strong gold demand.
"Roughly 40% of the working population are famers or farmworkers and 60% of the population relies on the sector for income."
With Dollar gold prices briefly erasing last week's 0.9% rally Tuesday morning, Euro gold prices spiked down to set a new 8-week low at €1483 per ounce.
UK gold prices in Pounds per ounce were less volatile as Sterling also fell on the currency markets following stronger-than-expected household borrowing figures and house-price inflation reading 13.7% per year, the fastest since 2004 according to the Nationwide lender.
Global stock markets were meantime mixed, while commodity prices rose again, led by crude oil.