END_OF_DOCUMENT_TOKEN_TO_BE_REPLACED

GOLD PRICES edged lower on Monday after reversing an earlier rise to 1-week highs as the US Dollar and longer-term US borrowing costs both rallied from new multi-month lows, hit amid news of widespread unrest in world No.2 economy China over the Communist regime's continued 'zero Covid' policy, writes Atsuko Whitehouse at BullionVault.
The Dollar index – a measure of the US currency's value versus its major peers – fell 0.3% to before steadying around the weakest since mid-August.
Spot gold prices then dropped back almost $15 per ounce from an overnight high of $1764, the highest since 18 November, while global stock markets fell and crude oil prices sank.
"Strength in gold has followed weakness in the USD, equities and crude," said market strategist John Reade at the mining industry's World Gold Council as 10-year US Treasury yields – a benchmark rate for government as well as many financial and commercial borrowing costs – briefly dipped below 3.625% per annum, the lowest since early October.
"Risk-off conditions in global markets related to China's Covid situation appear to be showing up in lower long-term sovereign debt yields," says Stephen Gallo, European head of FX strategy at Canadian broker BMO Capital Markets.
China's number of new daily cases rose to a fresh record above 40,000 yesterday, authorities said, including 36,525 with no symptoms.
Oil prices meantime fell near their lowest levels of 2022 on Monday, with Brent crude dropping 3.0% to $81.10 a barrel – the lowest since 4th January – and US West Texas Intermediate sliding 2.9% to $74.05, its lowest since 22 December last year. 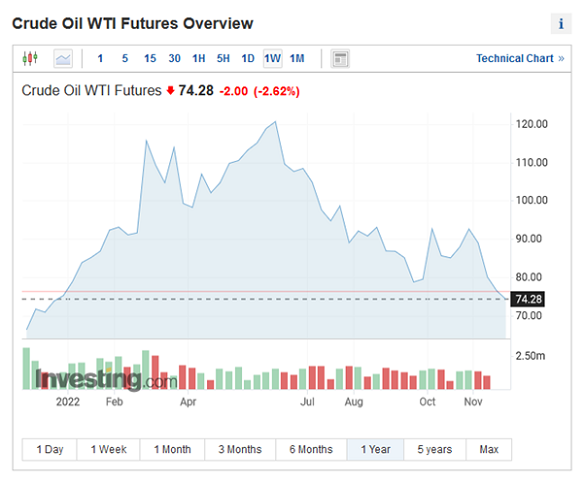 The poor economic outlook, spurred by the latest anti-Covid lockdowns in China – the world's biggest consumer of raw materials – plus the social unrest they have caused, also saw copper and iron ore trade sharply lower.
Protests against strict Covid measures escalated on Sunday evening, spreading to at least 8 major cities including the capital Beijing and financial hub Shanghai as well as Wuhan, where the Covid-19 outbreak began almost exactly 3 years ago.
People at Saturday's Shanghai protest chanted openly for President Xi Jinping to "step down" while the authorities in north-western city Urumqi denied that their 'zero Covid' rules had any blame for hampering rescue efforts at a tower block fire in which 10 people died.
Prices for silver, primarily an industrial metal which finds nearly 60% of its annual demand from productive uses, on Monday edged higher by 0.2% to $21.45 per ounce.
Platinum, which finds two-thirds of its demand from industrial uses led by auto-catalysts, also recovered an earlier drop by rising 0.4% to $991 per ounce.
Meanwhile, palladium – which finds well over 4/5ths of its end-use demand from auto-catalysts to cut carbon emissions from gasoline engines – rose more than 1% to $1842 per ounce after sinking 6% last week amid news of China's rising Covid cases, localised lockdowns, mass testing and other curbs.
The People's Bank of China on Friday cut reserve requirements for commercial banks once again, easing monetary policy against the global trend as economic growth slows hard.
Gold prices on the Shanghai Gold Exchange meantime continued to show a premium to London today, but it eased to $12 per ounce – well down from the recent near-record levels.
"Although seasonal demand is quite strong globally, the recent uptick in market prices coupled with renewed Covid lockdowns in China have dampened domestic demand," Reuters quotes one independent analyst.