END_OF_DOCUMENT_TOKEN_TO_BE_REPLACED

GOLD PRICES rose back above $1760 per ounce in London trade Friday, erasing all of the week's earlier 'flash crash' to 4-month lows as US Treasury bond prices rose despite fresh talk from members of the Federal Reserve about wanting to "taper" the central bank's $120 billion in monthly QE and debt purchases.
That pushed longer-term US interest rates lower despite new inflation data saying that the cost of living in the world's largest economy continues to rise at the fastest pace in 3 decades.
Priced in the US Dollar, gold today traded at 50 times its price of 50 years ago, an official 'peg' for the Dollar then abandoned by then-president Richard Nixon in a televised speech on 15 August 1971 as he suspended what remained of the global gold standard.
Like this year's 50th anniversary of the Nixon Shock, that was a Sunday. 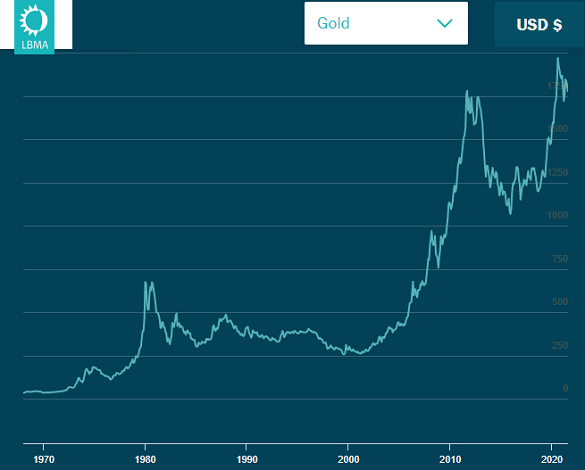 Gold priced in Euros and Sterling also reclaimed last week's closing level today, trading at €1498 and £1275 respectively after gold-backed ETFs grew slightly worldwide on Thursday, with New York's giant GLD and IAU trust funds seeing outflows of just 0.2% for the week so far.
After 'core' US consumer-price inflation for July came in at the 5.2% annual pace expected by analysts on Wednesday – slipping only slightly from June's 30-year high – US factory-gate inflation yesterday beat forecasts of 5.6% with a jump to 6.2%.
Separate figures Wednesday said that the US federal debt, having expanded by $11.9 trillion over the first 20 years of the 21st Century, has grown by a further $5.3 trillion in the last 18 months of Covid pandemic and lockdowns.
Yet US Treasury debt prices edged higher again this morning, pulling the yield offered to new buyers of 10-year debt down to 1.35% per annum – almost 4 whole percentage points below the pace of inflation –  while the so-called "real yield" signalled by inflation-protected TIPS bonds edged down to minus 1.06%.
When 10-year TIPS yields touched that level for the first time at the start of August 2020, gold prices broke new all-time highs above $2000 per ounce.
Gold's rolling 1-year correlation with real rates then stood at 93.3% on the r-squared measure, showing powerful and consistent inverse co-movement.
Yesterday that figure fell to 29.6% however, its weakest reading since June 2019 and sharply below the typical reading of 54.9% across the last 15 years. 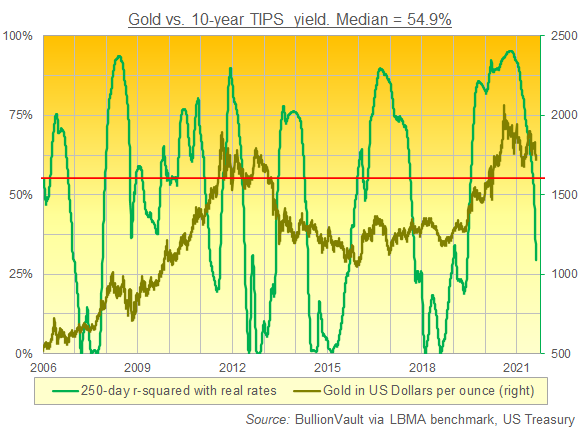 Calling for QE tapering to begin sooner than later, Atlanta Fed president Raphael Bostic – a voting member of the policy committee in 2021 and then in 2023 – said Monday that the central bank has made "substantial progress" towards the full employment and 2% annual inflation targeted by the Fed's historic monetary stimulus amid the Covid Crisis, "and [so] should be thinking about what our new policy position should be."
"We are making progress...We are well on our way," agreed Chicago Fed president Charles Evans, a voting member through 2024, on Tuesday.
But "we should not preemptively end a strong improvement in the labor market because somebody is getting nervous about inflation."
Dallas Fed president Kaplan – not a voting member until 2022 – then called on Wednesday for QE tapering to begin in October.
The same day, Richmond Fed president Thomas Barkin – not a voter until 2023 – said "we will get there in the next few months."
Either way, the Fed will unveil its tapering plan in September according to nearly 2/3rds of 43 economists polled earlier this week by Reuters.
That would mean no surprises at next weekend's Jackson Hole symposium for international central-bank policymakers, hosted every year since the early 1980s by the Kansas City Fed and focused in 2021 on "Macroeconomic Policy in an Uneven Economy".
Silver prices also edged higher on Friday alongside gold, but only recaptured half of Monday's 'flash crash' plunge to new 2021 lows at $20.20 per ounce, trading back at $23.40.
That's put today's Gold/Silver Ratio – a simple measure of the 2 formerly monetary metals' relative pricing – at the highest since mid-December at 74.5 ounces of silver per 1 ounce of gold.
The price of platinum – also like silver a predominantly industrial precious metal today – meantime extended its rally to $1027 per ounce after sinking Monday to new 8-month lows beneath $965.
"Notable price support during the Asian session," says yesterday's trading note from Swiss refiners and finance group MKS Pamp, "signaling physical demand."
For gold in contrast, "Chinese and [other Asian] physical demand remains muted, despite a pickup from very weak levels," MKS goes on.
"The physical floor is not steady if US data [and] Fed speak accelerate the taper message, prompting momentum paper selling to reignite."