END_OF_DOCUMENT_TOKEN_TO_BE_REPLACED

GOLD PRICES returned from the New Year's break $20 lower in London on Tuesday, briefly dipping through $1800 per ounce as global stock markets rose towards fresh all-time highs and commodity prices rose even as borrowing costs continued to steepen in the bond market.
"Treasury traders are betting Omicron will add to inflation spike," claims a headline at Bloomberg, citing yesterday's new daily record of 1 million Covid cases in the US, "hurting optimism that supply chains will return to normalcy in the near future."
With US financial markets open yesterday, 10-year and 5-year US Treasury yields both jumped by 11 basis points on Monday, the fastest 1-day rise since February and November respectively.
So-called real rates, however, as implied by the yield offered on inflation-linked Treasury debt, were more muted, with 5-year TIPS yields now more than reversing yesterday's 3 basis point rise on Tuesday to trade at the lowest in more than a month at minus 1.65% per annum.
But betting on when the US Federal Reserve will raise rates from 0% now puts the odds of a hike in March at more than 3-in-5, double the probability seen this time last month.
One-in-four bets on May now expects a 2nd rate rise that month, and 7-in-10 bets on December's Fed meeting now expect the US central bank to end 2022 with rates at a ceiling of 1.00% or above according to the CME's FedWatch tool.
Short-term Treasury yields have also leapt, with 2-year rates hitting their highest since February 2020's Covid Crash at 0.78% per annum.
But last time that US consumer prices rose so fast over the prior 12 months, US 2-year bonds were yielding almost 14% per annum. 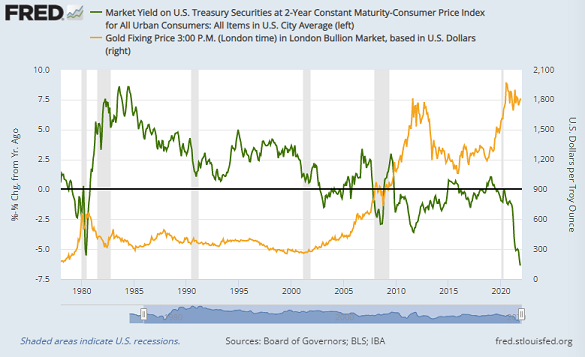 "An unwinding in ultra-accommodative central bank policy will be most outright bearish for gold and silver prices over the course of 2022," reckons the annual outlook from US investment bank and major bullion market-maker J.P.Morgan.
"[Yet] commodities are on pace to deliver the strongest year of returns since the early 2000s," it adds, pointing to "a constructive economic outlook, depleted inventory levels and supply still struggling to respond to resurgent demand" for energy, base metals and agricultural resources.
With a cold snap due this week, European gas futures for February 2022 today rose to trade at twice the price asked last August, but held more than 45% below late-December's peak.
Crude oil also gained, adding more than 1.0% to near 6-week highs above $76 per barrel of US benchmark WTI.
After showing an annual average gain of 22.7% in 2021, silver bullion prices meantime fell and then rallied with gold on Tuesday, trading back at $22.90 per ounce as the Comex futures and options market opened in New York.
Despite the drop in global gold prices ahead of the big Chinese New Year holidays starting at the end of this month, premiums for bullion landed in China – the precious metal's No.1 consumer nation – today slipped to the lowest since end-November.
The Shanghai Gold Exchange returned from its long weekend holidays to show an incentive of importing new metal from London of $5.60 per ounce, barely half the typical pre-Covid average.
Gold No.2 consumer India " splurged a record $55.7 billion on gold imports in 2021" reports Reuters meantime, quoting an anonymous government source, "as a price drop favoured retail buyers and pent up demand emerged for weddings that were delayed when the pandemic first hit."
With next-to-no domestic mine supply, India effectively shut its borders to new legal imports of gold when inflows last peaked in 2012, introducing punitive duties and highly complex rules.
Asian and European equity bourses meantime rose on Tuesday, after the S&P500 index of US stocks, which recorded 68 new all-time closing highs last year – the most since 1995 – began 2022 with another fresh record overnight, helping the MSCI World Index creep within 0.1% of last Wednesday's new high.