END_OF_DOCUMENT_TOKEN_TO_BE_REPLACED

GOLD PRICES slipped into the long Christmas weekend in London on Thursday, trading $5 below last week's finish as the fast-spreading Omicron variant of Covid-19 failed to dent a rally in world stock markets and new US data confirmed inflation has accelerated to the fastest pace in 4 decades.
After yesterday's third-quarter GDP revision showed annualized economic growth of 2.3%, beating analyst forecasts, the Bureau of Economic Analysis said Thursday that the so-called 'core' PCE measure of domestic US prices rose 4.7% per year in November.
Matching the peak of February 1989, that was the fastest such rate of inflation in the world's largest economy since September 1983.
With gold retreating to $1801 per ounce, major government bond prices also fell, edging longer-term interest rates higher after the US Federal Reserve last week admitted it was time to retire the word "transitory" in describing inflation, and accelerated its plans for tapering QE and then raising short-term rates. 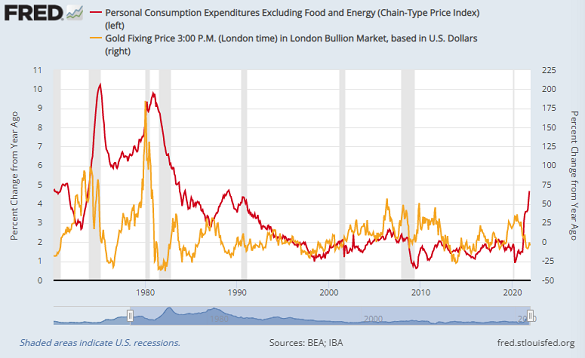 Global equities meantime extended their rise to a 3rd session running, coming within 1% of the latest all-time high – hit in mid-November – on the MSCI World index, even as cases of Covid continued to surge, leading more national governments to re-impose social restrictions.
Omicron now accounts for 90% of new Covid cases in some parts of the USA.
Nightclubs in Scotland are to be shut for 3 weeks, but infections with the Omicron variant in London "have probably peaked", according to one disease expert.
Belgium is closing cinemas and theatres, and both Spain and Greece are re-introducing mandatory face masks outdoors.
UK Gilt yields had earlier risen near 1-month highs, touching 0.93% on 10-year bonds, but still holding 1/3rd of a percentage point below October's 2.5-year peak.
Germany's 10-year Bund rate also rose to its highest in 4 weeks, but it still cost investors to own Berlin's debt rather than earning a positive yield, trading near -0.25% per annum.
Other Eurozone bond yields continued to outpace Germany's, with the spread of 10-year Italian BTPs over Bunds reaching 1.33%.
Up by more than 1/5th of a percentage point from this time last year, that BTP-Bund spread is above the post-financial crisis lows reached in early 2018, before the Five Star-League coalition took power and faced European Commission action over its "excessive deficit" spending.
"European banks prepare for pullback in ECB stimulus," says a headline from the Wall Street Journal, noting how covered bond issuance "rose recently to highest monthly level since pandemic began."
Driving this rush by Eurozone banks to issue new debt at record-low costs is "the threat of inflation, which will underpin a potential rate increase, or less liquidity provided by the central banks," reckons Gabriel Levy, global head of debt capital markets at French bank Natixis.
Berlin's new 'traffic light' coalition government this week confirmed long-time "Bundesbanker" Joachim Nagel as the new president of Germany's central bank.
Most recently working at the Bank for Bank for International Settlements (BIS), and widely seen as a "solid" and "safe" pair of hands, Nagel is expected to continue the anti-inflation rhetoric of his hawkish predecessor Jens Weidmann in discussions with fellow European Central Bank policymakers, albeit less bluntly in public.
Gold priced in the single Euro currency today hit €1600 before edging back €6 per ounce, while the UK gold price in Pounds per ounce re-touched Wednesday's 1-week low of £1342.
On the geopolitical front Thursday, Russia's President Putin used his annual televised address to the nation to repeat that Moscow doesn't want to invade Ukraine but does demand "unconditional security" guarantees from the US and other Western powers that the Nato alliance will not invite the former USSR state to join.
Having massed perhaps 100,000 troops on Russia's border with Ukraine, "Our actions will not depend on the negotiations," said Putin.
"They will depend on the unconditional compliance with the Russian security demands today and in an historical context."