END_OF_DOCUMENT_TOKEN_TO_BE_REPLACED

GOLD PRICES held onto most of yesterday's rally in London trade Tuesday as volatility hit the currency markets in what's already proving a busy week for central-bank announcements.
With US inflation running at 3-decade highs and the US Federal Reserve widely expected to start tapering its current QE money creation of $120 billion per month from tomorrow, the Reserve Bank of Australia today confirmed the suspension of its 'yield curve control' interventions in the bond market, but continued with longer-term bond purchases until February and stymied expectations it will raise Aussie Dollar interest rates next year.
"Inflation, in underlying terms, remains low in Australia, at 2.1%," said RBA governor Philip Lowe.
"The latest data and forecasts do not warrant an increase in the cash rate in 2022."
Canberra's government debt prices rallied on the news, while the AUD fell on the FX market, sending gold prices jumping 1.4% for Australian investors for the week so far at A$2400 per ounce.
UK gold prices in Pounds per ounce meantime tested their highest since early September at £1316 as Sterling retreated despite market-consensus saying the Bank of England will become the first major G7 central bank to raise its overnight interest rate following the Covid Crisis on Thursday.
Euro gold prices were softer at €1544 while the US Dollar price slipped only to $1790.
Despite US gold prices rallying 1.4% on Monday from Friday's 2-week low, the giant SPDR Gold Trust (NYSEArca: GLD) shrank yet again, with investor selling forcing the liquidation of 2.6 tonnes (0.3%) from the world's largest gold ETF product to take the GLD's total backing for its shares in issue down below 950 tonnes for the first time since start-April 2020.
The smaller iShares Gold Trust (NYSEArca: IAU) did not change for the 14th session running at 495 tonnes, marking its fewest shares in issue since start-August last year. 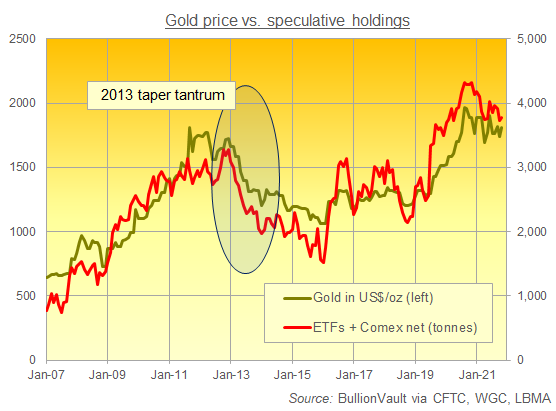 "Investors have had 4 months to exit gold ahead of the taper," says analysis for Swiss refining group MKS Pamp. "They have not."
When Comex net betting and ETF holdings are combined, "The current pace of outflows...is [2/3rds] smaller versus the leadup to the 2013 taper announcement," MKS says.
Longer-term reasons for investors to hold onto their gold include the "inflation/stagflation threat, bigger US government, peak supply growth, higher cost of production floors, Fed policy mistake, [and an] unsustainable debt trajectory ensuring lower real rates for the foreseeable future," the note goes on.
"With the short-term overhang and threat of the Fed taper soon behind it, gold becomes 'free again' to price in more of these longer-term drivers, but it still requires a gold-specific catalyst (Taiwan/geopolitics, US Dollar shock, etc) to jumpstart and enable prices to chew through the technical and selling pressure above [$1800]."
US Treasury and other major government bond prices all rallied Tuesday following Australia's central-bank news, with German Bunds offering 10-year yields of minus 0.15% per annum, 8 basis points below last week's new 29-month high of minus 0.06% per annum.
Inflation in the Eurozone's largest economy last month hit 4.5% per year, the highest since October 1993 and beating analyst forecasts of 4.4%.
Deposit rates at the European Central Bank have now been held at minus 0.5% since September 2019.
"She likes to wear luxury fashion (including Chanel), earns almost €40,000 a month, but doesn't seem to care about the worries of normal people," said German tabloid paper Bild at the weekend of ECB president Christine Lagarde, accusing 'Madame Inflation' of being 'Luxury Lagarde' while "melting pensions, wages and savings!" by failing to tighten the 19-nation Eurozone's monetary policy
Like the RBA today, Lagarde last week said that the ECB's latest analysis – plus a "lot of soul searching" over "inflation, inflation, inflation" – does "not support" the bond market's recent expectations for a rate rise sometime in 2022.