END_OF_DOCUMENT_TOKEN_TO_BE_REPLACED

GOLD PRICES slipped and then rebounded against a rising US Dollar in London trade Wednesday, retreating $17 per ounce from yesterday's 1-week high of $1900 before rising back to $1895 as global stock markets fell amid growing signs that the global economic rebound from spring's Covid Crash is weakening, with deflation in consumer prices spurring new dramatic shifts in central-bank policy to try and counter it.
Japan's industrial output fell 13.3% per year in August, worse than analysts expected, while growth in Australia's private-sector borrowing slowed to just 2.2% from 12 months before.
China's official government surveys of economic activity came in stronger than analysts expected for September, but the Caixin manufacturing PMI survey showed a small slowdown in growth.
France and Italy meantime reported 0.6% and 0.9% annual deflation in their consumer prices indexes, a day after Germany and Spain both reported 0.4% annual deflation for the year to September.
"Market-based measures of longer-term inflation expectations have fallen notably," said European Central Bank chief Christine Lagarde in a speech today, adding that "their anchoring" around the ECB's long-term inflation target of 2.0% per year "has softened".
To address this, the ECB is undertaking a major review of its strategy, Lagarde went on, apparently following the US Federal Reserve's lead in abandoning its 2.0% inflation target last month in favour of wanting faster increases in the cost of living.
"If credible, such a strategy can strengthen the capacity of monetary policy to stabilise the economy when faced with the lower bound [of zero interest rates]," Lagarde added.
ECB policy rates have now imposed negative charges on commercial banks holding cash on deposit with the 19-nation monetary authority since mid-2014.
Euro gold prices have risen nearly 70% since then. 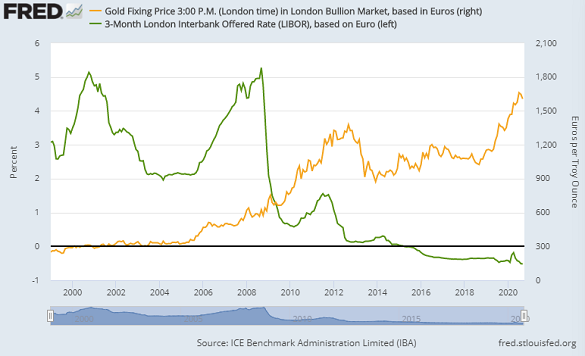 November's highly uncertain US presidential election could "add to further volatility and result in safe-haven flows...into gold," says analysis from Swiss bank UBS, expanding on comments from its Asian wealth management team earlier this week.
UBS also sees gold rising thanks to "supportive Fed" policy, plus "a more indebted world."
Last night's "rancorous Presidential debate helped neither candidate" says a note from bullion, commodities and equity brokerage StoneX, and stimulus talks between Republican and Democrat politicians are "still hamstrung".
Gold priced in the Euro and UK Pound today retreated 0.5% from Tuesday's 1-week highs at €1617 and £1477 per ounce respectively before edging back above those levels at the start of New York trading.
Silver meantime extended the earlier retreat in US Dollar gold prices before rallying back above $24 as the yellow metal reached $1895 following news that US employers hired 749,000 new workers net of job losses in September on the ADP Payrolls report, beating analyst forecasts by 15%.
The official non-farm payrolls estimate from the Burea of Labor Statistics is due out Friday.