END_OF_DOCUMENT_TOKEN_TO_BE_REPLACED

GOLD BULLION rallied from a new 2.5-year low against the almighty Dollar on Tuesday, bouncing $15 per ounce after hitting a price of $1621 as the US currency rose near yesterday's fresh 2-decade highs against the Euro on expectations of Federal Reserve interest rates further outpacing the rest of the Western world in a bid to curb inflation.
Asian and Western stock markets then rallied, as did industrial and energy commodity prices, after falling yet again Monday. But government bond prices erased an earlier gain to drive longer-term borrowing costs up to fresh multi-year highs across Europe.
With the Euro dropping to $0.96 on the FX market, Germany's 10-year borrowing cost jumped towards 2.20% per annum, the highest since late 2011, after European Central Bank chief Christine Lagarde said yesterday that "the [economic] outlook is darkening" for the 19-nation currency union thanks to strong inflation, surging energy costs and tightening monetary policy.
That put the price of gold bullion for Euro investors back above €1700 per ounce. 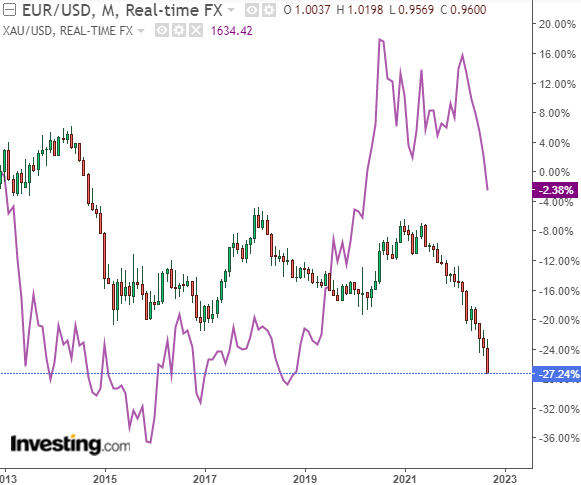 Bullion priced in British Pounds meantime gave back all but £5 of Monday's £65 spike to a record £1581 for gold in Sterling as GBP continued to stabilize on the FX market just below $1.08 – some 5 cents above yesterday's fresh all-time lows to the Dollar – following last week's "economic suicide note" of a budget from new Chancellor Kwasi Kwarteng.
The UK's 10-year borrowing cost in contrast rose again, now up to 4.32% per annum at the highest since 2008, despite yesterday's reassurance from Andrew Bailey, Governor of the Bank of England, that he "will not hesitate" to raise short-term interest rates to address the UK's sudden government debt crisis, albeit not before the BoE's next scheduled meeting in mid-November at the earliest.
Silver prices also rallied with gold bullion but again outpaced the dearer precious metal, up 40 cents from a 3-week low of $18.33 hit overnight.
"There are more bearish triggers for gold as more rate hikes are scheduled by the Fed," Reuters quotes one Delhi-based brokerage.
"ETF investors are responding by jettisoning their gold holdings in grand style," says Germany's Commerzbank.
Both the giant GLD and smaller IAU gold ETFs shrank by another 0.4% on yesterday's price drop in gold, with shareholder selling taking them to their smallest sizes in well over 2 years.
"Gold's status as a haven asset in times of economic distress has failed to stem the flow of selling," says Australasian bank ANZ.
"The dominance of the US Dollar has hit sentiment across the commodities complex and gold has not been spared," says Dutch bank ING in a note.
Crude oil however rallied on Tuesday, led by European natural gas prices gaining over 5% from Monday's 7-week lows for December contracts, after leaks were found in 2 undersea pipelines for supplying Russian gas – an "unprecedented" event according to operator Nord Stream.
"No option [including sabotage] can be ruled out right now," said a Kremlin spokesman, concurring with Danish and Polish counterparts.
US inflation forecasts in the bond market also rallied Tuesday after slipping to 2-month lows yesterday on the 10-year breakeven rate at 2.29% per annum while the 5-year 5-forward rate also fell Monday, down 0.3 percentage points from April's spike to the highest since January 2014 at 2.67% per year.
Yesterday's PM London benchmark auction discovered the lowest price for gold bullion since 3 April 2020, fixing a little above $1643 per ounce.
Volume slipped 8.0% from the morning auction – which had fixed $4 higher – but outstripped August's daily average by 40.0% according to data from independent benchmark administrators ICE.
New data Tuesday said house prices across the USA fell in July from June on average, the first monthly drop since May 2020 on the FHFA data, depths of the first-wave Covid Crisis.
Durable goods orders, in contrast, came in strong for August, with demand for capital goods outside the defense and auto sectors rising 1.3% for the month.