END_OF_DOCUMENT_TOKEN_TO_BE_REPLACED

GOLD PRICES in the US Dollar pared an early drop to new 2.5-year lows on Monday, writes Atsuko Whitehouse at BullionVault, while bullion priced in the UK Pound retreated after spiking back to March's all-time high amid fresh turmoil following last week's "fiscal event" from the new administration of Prime Minister Liz Truss.
Global stock markets fell for the 15th session in the last 20, while government bond prices also fell again together with most industrial and energy commodities in Dollar terms.
The gold price in Euros meantime held unchanged, edging 0.2% higher to €1700 per ounce as the 19-nation single currency hit a fresh 2-decade low against the Dollar on the forex market and a 'post fascist' coalition won a decisive election victory in Italy.
"As long the Dollar continues its relentless rise and until the market reaches peak hawkishness and yields start to top out, gold will struggle to act as a defence against stagflation," reckons the strategy team at derivatives platform Saxo Bank.
"The global economy has been hit," said international agency the Organisation for Economic Cooperation and Development today, cutting its GDP forecasts for almost all the Group of 20 leading nations and erasing $2.8  trillion from the OECD's global 2023 forecast compared with its pre-Russian invasion of Ukraine outlook – a loss of income equivalent to the French economy.
Spot gold prices in the Dollar steadied at $1640 per ounce after falling as low as $1627 in Asian trade Monday, while yields on US Treasury bonds rose again, adding another 10 basis points to both nominal and inflation-protected 10-year rates.
Meanwhile the UK gold price in Pounds per ounce leapt 4.4% to hit the all-time-high of £1580 first touched when Russia invaded Ukraine this spring, before settling back to £1511 as Sterling rallied from a new all-time low versus the Dollar on the FX market amid speculation that the Bank of England will make an emergency hike to UK interest rates of 100 basis points. 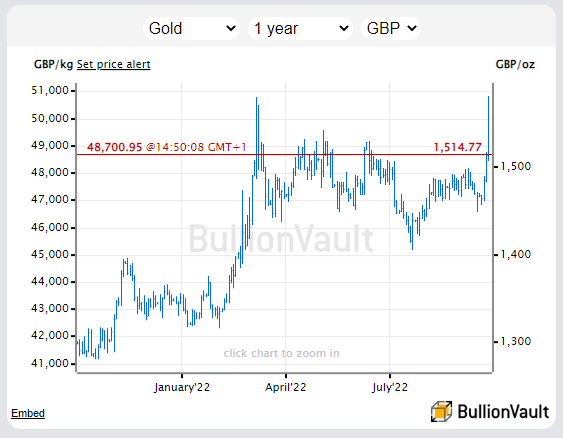 Last Thursday the BoE disappointed the currency market by raising only 50 basis points at its scheduled September meeting, with just 3 of the voting committee's 9 members wanting to match the US, Eurozone and Swiss central banks in hiking by 75.
Friday then saw new Chancellor Kwasi Kwarteng unveil the deepest tax cuts in 50 years, trying to "go for growth" by borrowing massively from the bond market to fund fiscal stimulus.
After announcing unfunded reductions in the top rate of income tax, national insurance, and stamp duty worth £45 billion – some 2% of annual GDP – Kwarteng said on Sunday that there's "more to come" on tax cuts.
"The Pound's crash is showing markets have a lack of confidence in the UK and that its financial strength is under siege," says one strategist in Sydney.
"The UK is now in the midst of a currency crisis," agrees Vasileios Gkionakis, head of foreign exchange strategy at US financial giant Citigroup.
British government bond prices collapsed on Monday, pushing yields to their highest in over a decade with 2-year Gilt yields jumping by more than 50 basis points for a 2nd session running to 4.53%, the highest since September 2008.
That means UK bond prices are on track for their biggest slump of any calendar month since at least 1957, according to a Reuters analysis of Refinitiv and Bank of England data.
European bond prices also slid on Monday, led lower by Italian sovereign debt, after victory for a coalition led by the Brothers of Italy in the country's snap election, forced by parties across spectrum pulling their support for former European Central Bank chief Mario Draghi as caretaker premier.
Led by Giorgia Meloni, Italy's first woman Prime Minister, and marking the first far-right Italian Government since Mussolini, the group won around 43% of the national vote and includes pro-Russian politicians Matteo Salvini of the nationalist League and former premier Silvio Berlusconi of Forza Italia.