END_OF_DOCUMENT_TOKEN_TO_BE_REPLACED

GOLD PRICES held little changed for the week so for in Dollar terms on Thursday in London, unmoved by the US Fed hiking to the highest borrowing cost since 2008 overnight but jumping in UK Pounds and Swiss Francs despite fresh interest-rate rises from the Bank of England and SNB.
Japanese gold prices in contrast fell hard, retreating from this summer's record highs as the Yen surged versus the Dollar after Tokyo intervened in the FX market to buoy the currency from fresh 24-year lows. 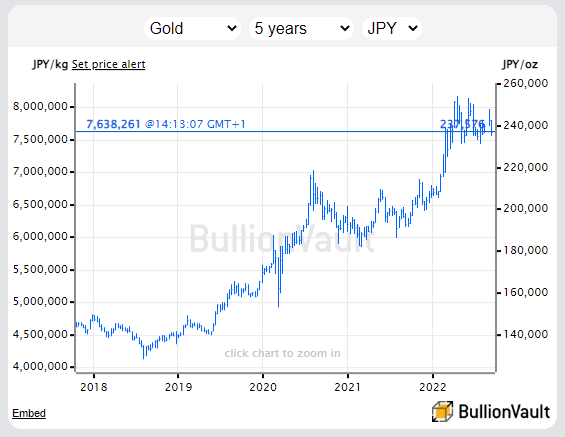 Trading $5 higher to $1680 for US Dollar investors, the UK gold price in Pounds per ounce rose back above £1480 after dropping £10 ahead of today's BoE decision to raise Bank Rate by half-a-point to 2.25% per annum.
Three of the 9-person MPC committee voted for a 0.75-point hike. UK inflation last month rose to 10.1% per year.
Gold priced in Francs meantime jumped 3.2% from an overnight low, hitting 2-week highs above CHF1646 as the Swiss currency sank on the foreign exchange market despite the Swiss National Bank hiking its key interest rate by a "jumbo" 0.75 points to 0.5%, offering the first positive return on cash since 2011.
Inflation in Switzerland last month rose to 3.5% per year.
"The SNB is countering the renewed rise in inflationary pressure," said the central bank in Zurich, vowing to hike rates further if needed "to ensure price stability."
The UK and Swiss moves came after a surprise intervention in the currency market from the Bank of Japan, buying Yen after it fell through ¥145 for the first time since 1998 – the last time that Tokyo officially announced FX intervention.
That move came as the Bank of Japan yet again held its key interest rate at minus 0.1% and confirmed its commitment to buying and trading Japanese government bonds to hold the 10-year yield at 0% per annum.
Ten-year JGB yields today slipped back from 0.25% per annum after reaching the highest since early 2016, while the Yen price of gold bullion dropped 2.9% to dip below ¥7,570 per gram for the first time since start-August.
That level was a new record price for JPY gold when reached just ahead of Russia invading Ukraine this February.
With the Swiss Franc hitting new record highs against the Euro ahead of today's decision, "The SNB is also willing to be active in the foreign exchange market," it added – something not seen since the Swiss central bank stopped pegging the Franc against the Euro in 2015.
Back in the gold bullion market, the giant GLD ETF liquidated another 0.1% on Wednesday as the Federal Reserve raised its overnight Dollar interest to 3.25% as expected.
With the GLD now the smallest in 2.5 years, No.2 competitor gold ETF the IAU also shrank as the Fed hiked by 0.75 point for the 3rd meeting running, down to 0.3% to its smallest in over 7 months.