END_OF_DOCUMENT_TOKEN_TO_BE_REPLACED

GOLD PRICES will rise 12% over the next 12 months, the average forecast from attendees of the LBMA's virtual 2021 conference said Monday.
Hosted online owing to Covid restrictions, the bullion market's premier annual event also found almost 1-in-3 attendees backing silver to outperform the other major precious metals by the time of the next conference, planned for October 2022.
Monday saw gold prices fall to new 6-week lows before rallying $25 per ounce to $1765 as global stock markets sank with commodities and longer-term interest rates amid the latest debt-crash headlines around Chinese real-estate developer Evergrande.
The US Federal Reserve meets tomorrow and Wednesday, with a move to reducing its new stimulus by tapering the current $120 billion in monthly QE bond buying universally expected at the end of last week. 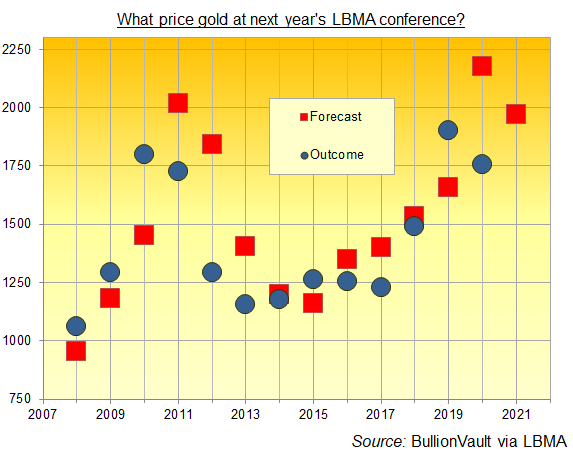 "Embattled China property giant sparks economy fears," says one headline.
"Crypto Markets Suddenly Lose $250 Billion In Value As Evergrande Turmoil Pummels Bitcoin," says another.
In contrast to gold prices, silver fell and bounced but failed to regain last weekend's level after hitting fresh 2021 lows only 4 cents above $22 per ounce.
That pushed the Gold/Silver Ratio of the 'safe haven' divided by the more industrial precious metal up to 78, the highest in 10 months but still far below the Covid Shock's all-time peak of 120 set in March last year.
Platinum prices also fell hard as the risk of an Evergrande debt default jumped, along with the threat of 'contagion' across China's highly leveraged real estate market.
Platinum's discount to gold deepened to $830 per ounce as the metal hit $912, its cheapest since November last year and one-third below February's 6-year highs.
Based on the LBMA benchmark price, last week's plunge in gold – the steepest weekly drop since mid-August at nearly $40 per ounce – saw little change in investor holdings of gold-backed ETF trust funds, with the giant SPDR Gold Trust (NYSEArca: GLD) actually expanding by 0.4% from the prior Friday, its first weekly gain in 7 weeks.
Data to last Tuesday – the latest figures available from US regulator the CFTC – meantime say that speculators grew their bullish betting on gold futures and options, extending their net long position by 4.6% from a week earlier but with total open interest in all Comex gold derivatives falling for the 3rd week in a row.
Ahead of last week's later drop in gold prices, that net spec long among hedge funds and other Managed Money traders was 28% below its 5-year average.
Silver betting was meantime 49% below its half-decade average, falling in the week-to-last-Tuesday for the first week in 4.
Speculators remained net bearish overall on platinum for the 7th week running, while palladium – whose primary use is in gasoline engine autocats – turned net negative among money managers for the first time since these data began in 2006.