END_OF_DOCUMENT_TOKEN_TO_BE_REPLACED

GOLD PRICES fell back below $1800 per ounce Wednesday as global stock markets extended yesterday's fresh record highs in New York's Nasdaq and S&P500 indices while government bond prices slipped ahead of Friday's much-anticipated Jackson Hole speech from US Fed chairman Jerome Powell.
Silver held firmer than gold – down to $1795 – by trading 3.2% higher for the week so far at $23.83 per ounce.
Euro gold retreated to €1529 per ounce and the UK gold price also cut its week-to-date gain below 0.3% at £1310.
With pundits forecasting that Powell's team will start 'tapering' their $120 billion in monthly QE bond purchases later this year, annual yields offered to new buyers of 2-year US Treasury debt today held at Tuesday's level of 0.24%, the highest since late June.
That yield  appeared to attract investment into a new tranche of 2-year debt sold by the Treasury yesterday, with the $60 billion on offer being over-subscribed 2.6 times.
Foreign bidders accounted for more than 60% of that demand for Washington's debt – the most in a decade – but for domestic US investors, that 0.24% yield still lags last month's annual headline pace of consumer-price inflation by more than 5 full percentage points.
That's the most deeply negative real rate on 2-year notes since gold ended the inflationary 1970s with a 20-fold price increase for the decade. 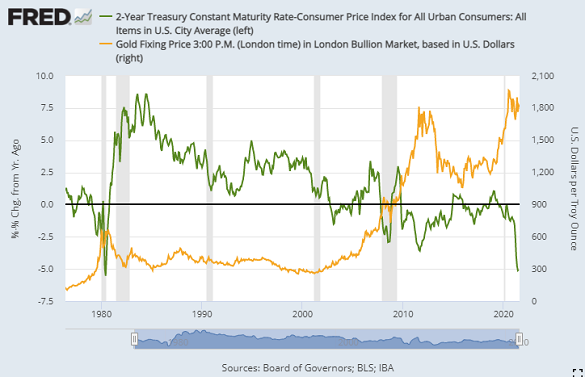 Five-year US Treasury yields meantime rose to 0.79% on Wednesday, still lower for this week so far, while 10-year yields touched 1.30% for the first time in a fortnight.
Commodity prices rose further, with Brent crude oil also touching 2-week highs above $71 per ounce, over 10% higher from Monday morning's 3-month low.
Tuesday's fresh record highs in US stock markets coincided with more liquidation by shareholders selling out of the SPDR Gold Trust (NYSEArca: GLD), the world's largest gold-backed ETF investment product.
Shrinking by another 0.2% the GLD now needs 1,004 tonnes of bullion to back its shares in issue – over 1/5th less than at last September's 7.5-year record of 1,278 tonnes.
"The higher equity markets, the risk-on narrative...[are] really diminishing the need for gold as a hedge," reckons one asset management partner.
There's now a 45% chance that the US Federal Reserve will start 'tapering' its $120 billion of monthly QE money creation and bond buying in November, analysts at US investment bank Goldman Sachs now claim, up from their previous odds of 25%.
Cutting by $15bn per month "would mean that the FOMC would make the final taper at its September 2022 meeting."
As for Friday's much-anticipated speech from US central-bank chief Jerome Powell, "Expectations are rising that [the] Fed Chair will be vague about the timing," says Daniel Hynes at Australian bank ANZ.
"A few participants" at last month's US Fed policy meeting "suggested that preparations for reducing the pace of asset purchases should encompass the possibility that the reductions might not occur for some time," according to the minutes released last week.
That was described by one journalist as the most "Fed-iest sentence" ever.
But "the market has [now] convinced itself that the taper is sooner rather than later," Reuters quotes one interest-rate strategist today.
"If Powell doesn't repeat that message [on Friday] I think you're going to see traders confused."