END_OF_DOCUMENT_TOKEN_TO_BE_REPLACED

GOLD PRICES fell to a 3-week low on Monday, as the US Treasury yield steadied to a one-month high as the US dollar hit a 5-week high, while higher premiums on Chinese gold prices and surging gold imports to China indicate an increased gold demand, writes Atsuko Whitehouse at BullionVault…
Spot gold was down 0.9% to $1731 per ounce this Monday, the lowest since 27th July, after dropping 3% last week to make its first weekly decline in five weeks.
Ten-year US Treasury yields – a benchmark rate for government as well as many finance and commercial borrowing cost – firmed at just below 3% last Friday, the highest since 21st July, after Federal Reserve officials reiterated their commitment to tighter monetary settings to curb inflation.
The Dollar index – a measure of the US currency's value versus its major peers – hit a fresh five-week high, as the Euro fell back to 5-week lows against the US dollar as Russia announced a three-day halt to European gas supplies via the Nord Stream 1 pipeline at the end of August 2022, exacerbating the region's energy crisis.
Gold priced in Euros fell 0.5% to €1731 as the Euro hits parity against the US dollar in FX markets, while the UK gold price in Pounds per ounce was also down 0.8% to £1465.
Meanwhile, China's yuan also dropped to its lowest in nearly two years against the US dollar after the central bank cut key lending rates, adding to a string of monetary easing measures aimed at shoring up an economy reeling from COVID-19 clampdowns, inflation and a property crisis.
The one-year loan prime rate (LPR) was lowered by 5 basis points to 3.65% at China's central bank monthly fixing on Monday, while the five-year LPR was slashed by 15 basis points to 4.30%.
Gold prices on the Shanghai Gold Exchange continued to show a premium to London, increasing to $14 per ounce on Monday, the biggest in 6 weeks, after Chinese wholesale bullion premium for the last three weeks steadied at $8 - $9. 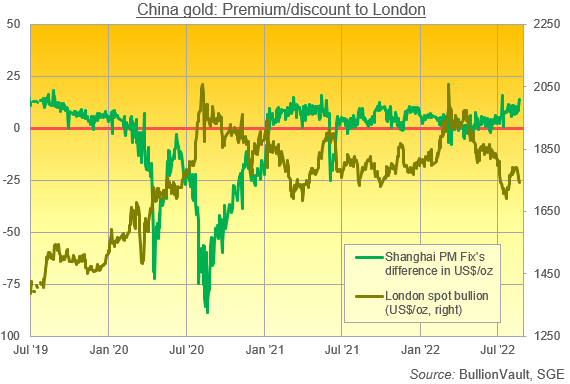 Shanghai's premium to London has so far averaged $4 this year after recording discounts for several weeks in March and April, dis-incentivizing new imports to China for the first time since November 2021.
“China has gone from a situation where everything was closed to things are back to semi-normality,” said Nikos Kavalis, a managing director at consultancy Metals Focus Ltd.
“The market’s still not great, but it’s definitely a lot better than it was in April.”
"Persistently lower gold and silver prices, as the US dollar remained strong, have been a positive driver of global physical and retail bullion demand this week," said Nicky Shiels, Head of Metals Strategy at MKS PAMP on Asian gold demand.
Gold imports to China, the metal’s No.1 consumer market, from the major refining hub of Switzerland jumped to the highest in more than five years.
China shipped in more than 80 tonnes from Switzerland in July, according to Swiss Federal Customs Administration.  It was the second-highest monthly total in figures that stretch back to 2012.
The surge in shipments to China lifted Switzerland's total gold exports to 186.2 tonnes in July, again the most since 2016.
World Gold Council also reported seeing a big increase in Swiss gold export to China, which saw 147% jump from the previous month. 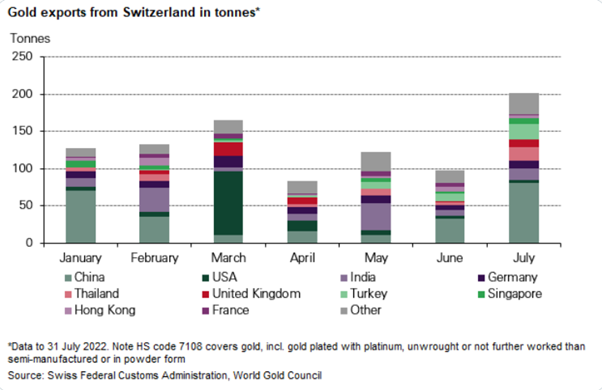 While the country’s purchases rarely have the power to drive prices higher, they can provide a floor when Western investors sell.
“ The Chinese purchases are being offset by persistent outflows from the gold ETFs,” said strategists at Commerzbank.
Gold-backed ETF trust funds shrunk, as both the SPDR Gold Trust (NYSEArca: GLD) and the iShares gold ETF (NYSEArca: IAU) made respectively their 3rd and 12th consecutive weekly outflows.
Latest data shows that hedge funds and other leveraged speculators in Comex gold futures and options cut their bullish betting on gold as a group in the week-ending 16th August, and rose their bearish betting.
Overall, that pushed the net long position of Managed Money traders down to 12%, a notional weight of 20 tonnes, after adding nearly 200 tonnes for the last two weeks.
As well as the strength of US dollar, the Chinese demand outlook is weighing on oil prices, which sank below $90 a barrel in New York. Traders are monitoring Iran’s nuclear talks that could lead to more supplies.