END_OF_DOCUMENT_TOKEN_TO_BE_REPLACED

GOLD PRICES headed for a $10 weekly gain Friday in London, rising as global stock markets and industrial commodities both continued this week's drop following the Taliban takeover in Afghanistan, weak economic data from China, strong 'taper talk' from the US Fed, and auto-giant Toyota slashing next month's production forecast because of the global supply-chain crunch hitting microchips.
Asian and European equities fell for a 5th session running, putting the MSCI World Index of major-market stocks on track for its worst weekly drop since February.
Agricultural commodities also fell again, while crude oil extended its longest run of daily price drops in almost 2 years as the US Dollar rose further on the currency market.
Iron ore sank to its lowest so far in 2021, dropping more than one-third from this spring's top.
Copper fell back towards Thursday's new 6-month lows, down almost 20% from May's all-time highs. 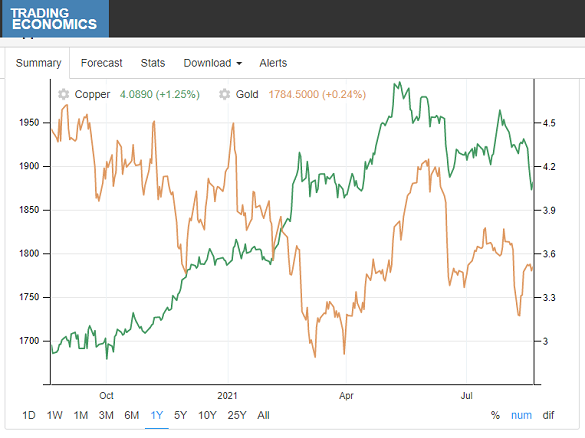 While the rising Dollar helped cap gold at a 2-week high for US investors, it put the gold price in Euros back up in the middle of July's range – before the strong US job data spurred a "flash crash" in precious metals – above €1525 per ounce.
The UK gold price in Pounds per ounce also headed for its highest weekly close in four, trading above £1308.
"There's still persistent pressure in commodities continuing across the board," says a note from Swiss bullion refining and finance group MKS Pamp, "except for gold which is finding its safe haven feet."
"However, the gold market is struggling somewhat with concerns over the timing of Fed tapering," says Nicholas Frappell, global general manager at Australian refiners and retailers ABC Bullion.
US President Joe Biden enraged Nato allies on Sunday by blaming Afghan troops for not fighting hard enough to prevent the Taliban retaking control of Afghanistan 20 years after Washington and New York were hit by the 9/11 attacks, planned from the mountain country by Osama bin Laden.
China on Monday then reported a sharp drop in factory-output and retail-sales growth amid the worsening Covid wave and flood disruption hitting the world's No.2 economy.
The US Federal Reserve – currently creating and spending $120 billion per month to buy government and mortgage-backed debt – then used the word "taper" 16 times in minutes released Wednesday from late-July's policy meeting, up from zero for the first time since last November, with participants reportedly expressing "a range of views on the appropriate pace" after the central bank's economic staff laid out options for the "tapering process".
Yesterday then saw world No.1 automaker Toyota (TYO: 7203) cut its September production forecast by 40%, announcing a run of daily suspensions for 27 out of 28 lines at 14 plants in its home nation of Japan forced by shortages of materials including microchips.
Alongside this week's drop in world equities and commodities, gold-backed ETFs have also seen net liquidation by investors, extending the sector's 3.2% year-to-date outflows.
By last night's finish in New York, the giant SPDR Gold Trust (NYSEArca: GLD) had shrunk by another 0.7% so far this week to need the smallest quantity of bullion backing since 20 April 2020.
Also heading for a 3rd consecutive weekly decline, the world's 2nd largest gold ETF the iShares product (NYSEArca: IAU) had shrunk by 0.5% since last Friday night, reaching its smallest since 6 May this year.
More dramatic is the outflow from silver's largest ETF, the iShares trust fund (NYSEArca: SLV), now shrinking by 0.6% so far this week to it smallest size since mid-December.
Finding over half its end-user demand from industrial and technology applications, silver today marked its cheapest Friday benchmark in London since end-November, trading around $23.20 per ounce.
Fellow industrial-precious metal platinum meantime gave back all of last week's 5.0% bounce to trade down at $983 per ounce.