END_OF_DOCUMENT_TOKEN_TO_BE_REPLACED

GOLD PRICES held steady against the US Dollar on Monday morning in London, as China's stock market reversed earlier losses but Eurozone equities erased opening gains.
Gold priced in the Euro edged 0.5% higher as the single currency ticked lower on the FX market, but continued to hold stronger against the Yuan from last week's 'devaluation' by Beijing.
After the LBMA Gold Price – the world's benchmark daily price – saw heavy volume set the highest weekly finish since mid-July on Friday at $1118.25 per ounce, interest eased Monday morning with the AM auction 'fixing' one Dollar lower in London.
Silver prices held firm above last week's finish, but traded 2% below Friday's spike to 1-month highs at $15.62 per ounce.
"Only by involving Chinese financial institutions in the global gold fix mechanism," says Beijng-approved news-site China Daily, quoting Roland Wang at market-development organization the World Gold Council, "and by advancing [Yuan-denominated contracts] can China increase its gold price-fixing power accordingly."
Further liberalization of China's domestic gold exchanges will see the world's largest mining and consumer nation "taking its place" in the world market, says Wang.
Trading in Shanghai's 'international' gold contract expanded on Monday, but volumes stayed at one-seventh their average size since launching 12 months ago, having spiked and then fallen to zero between spring and summer 2015. 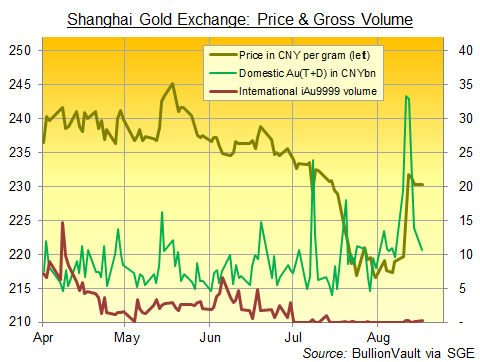 A report from the World Gold Council last year said "as much as 1,000 tonnes of gold may have been used for financing deals in China," notes Reuters columnist Clyde Russell today.
"If this gold is released back into the market, it will cut the need for imports into China, which would be bearish for gold prices."
Shanghai gold prices held steady against the Yuan on Monday, edging their premium above London prices – effectively the incentive offered to importers – up to $2.60 per ounce, some 25% above the last 12 months' average, as the Chinese currency crept higher again on the FX market.
Recovering one-third of last week's sharp drop against the Dollar, sparked by the People's Bank changing its FX policy from a fixed exchange rate to market prices, the Yuan still held almost 5% weaker against the Euro.
"Make no mistake," writes Societe Generale strategist Albert Edwards, "this is the start of something big, something ugly.
"The West has been heaving a sigh of relief over the past few months that deflation pressures have abated somewhat...[But] deflation has only been intensifying in Asia and China [has been] forced by economic reality to participate in competitive devaluation."
US crude oil contracts today hit new 6-year lows beneath $42 per barrel, while US Treasury yields fell back towards last week's 2-month lows at 2.18% on the 10-year bond.
After the Athens parliament on Friday approved 'austerity' measures for Greece to get a third bail-out from its Eurozone partners, German chancellor Angela Merkel said Sunday she expects the International Monetary Fund "to take part" in financing the deal.
The IMF "knew" in April that Greece was effectively bankrupt, and needed some of its debt written off, claims ex-finance minister Yanis Varoufakis on his blog, also pointing to a New York Times report.