END_OF_DOCUMENT_TOKEN_TO_BE_REPLACED

GOLD PRICES eased from a one-week high as the US dollar rose on souring risk appetite, amid speculators slashing their net long positions on gold and silver by more than 50% writes Atsuko Whitehouse at BullionVault.
Spot gold fell 0.4% to $1772 per ounce this morning, after rising 1.5% to one-week high on Friday, as a survey showed US consumer sentiment dropped to its lowest level in a decade.
"The sharp price move on Friday also triggered some minor profit-taking on Monday,” said Harshal Barot, a senior research consultant for South Asia at Metals Focus.
The Dollar Index – a measure of the US currency's value versus its major peers – edged higher after retreating to a one-week low last Friday.
Gold futures had become “oversold” following sharp losses during the last weeks, an analyst told MarketWatch.
“The rebound in prices seen since then is largely due to investor recognition that the crash was simply short-term market manipulation and no real reflection on the supply/demand dynamics for the metal.”
The price of the yellow metal collapsed after stronger-than-expected US jobs report published on 6th August and reached its climax during the early hours of the Asian session on 9th August hitting a 4-month low.
Latest data show that hedge funds and other leveraged speculators in Comex gold futures and options grew their bearish betting more than two thirds on gold as a group in the week-ending 10th August, and cut their bullish betting by nearly one fifth.
Overall, that slashed the net long position of Managed Money traders by 52%, the smallest in more than 4 months. 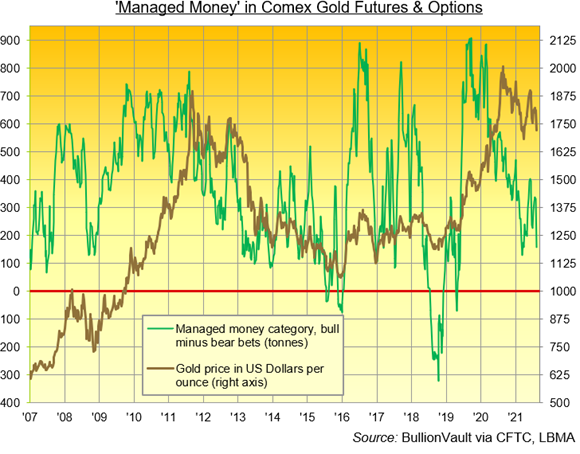 Speculators also cut their net bullish betting against silver by 54%, the smallest in 15 months, according to the data by US regulator the Commodities Futures Trading Commission (CFTC).
Money manager also pushed platinum net bearish betting higher to more than double, the biggest in 13 months.
Platinum, which finds two-thirds of its demand from industrial uses, led by auto-catalysts, sank 1.6% to $1016 per ounce this Monday morning, after rising 5% last week.  The discount to gold rose to nearly $800 per ounce last week, from an April low of $500.
The price of silver, which finds nearly 60% of its annual demand from industrial uses, also fell 1.4% to $23.46 per ounce, adding to the 2.2% decline during the previous week.
The weakness of silver pushed  the Gold/Silver Ratio – which tracks the two formerly monetary metals' relative prices – up further to above 75, the highest value for gold versus silver in 8 months.
Oil slumped for a third consecutive day as Chinese economic data disappointed, and the spread of the delta coronavirus variant hurt prospects for global demand.
Data showed China’s factory output and retail sales growth slowed sharply and missed expectations in July 2021.
China’s National Bureau of Statistics cited the impact of a range of factors, including growing external uncertainties, the ongoing Covid-19 epidemic and flooding. The bureau added that the “economic recovery is still unstable and uneven.”
European stocks were lower this Monday, tracking Asian markets as events in Afghanistan, disappointing China data and the resilience of the delta variant are all curving risk appetite.
The pan-European Stoxx 600 was down around 0.6% on Monday morning, following a tenth consecutive positive trading session last Friday.
The 10-year Treasury yield – it moves inversely to prices – extended its one-week low recorded last Friday to below 1.3%.
Market participants closely monitored the potential geopolitical implications of the collapse of the Afghanistan government, as the Taliban took effective control of Afghanistan over the weekend after a succession of shocking battlefield reversals, spurred by the exodus of US and coalition forces.
“If the days of the single-superpower world are over then the fall of Kabul will be bearish for the US dollar and the US Treasury market, and bearish for the countries ‘free-riding’ under the US security umbrella,” said Louis-Vincent Gave, chief executive officer with Gavekal Capital.
“It will be bullish for gold, the ultimate antifragile asset at times of geostrategic strife.”