END_OF_DOCUMENT_TOKEN_TO_BE_REPLACED

GOLD PRICES sank to 1-week lows against a rising US Dollar on Monday following more 'hawkish' comments from Federal Reserve policy makers ahead of this week's release of minutes from the US central bank's latest meeting, writes Atsuko Whitehouse at BullionVault.
Bullion prices then steadied after new US data said manufacturers in New York State are reporting the worst economic conditions since the Covid Crash of spring 2020.
China's central bank meantime unexpectedly cuts its key interest rates overnight as data from the world's 2nd largest economy continued to disappoint analyst forecasts.
That saw the Dollar index – a measure of the US currency's value versus its major peers – initially extend Friday's rally from 6-week lows following cooler-than-expected US inflation data for July.
Spot gold bullion prices fell 1.4% in response after rising for 4 weeks in a row to hit 1-month highs on Friday, dropping to $1777 per ounce and also erasing last week's gains for Euro and UK investors at €1740 and £1470 respectively.
Meanwhile, 10-year US Treasury yields – a benchmark rate for government as well as many finance and commercial borrowing costs – traded flat at 2.8% per annum, while 2-year bond yields also showed little change at 3.2% ahead of Wednesday's publication of Federal Open Market Committee meeting minutes.
That left the 10-2 yield curve deeply inverted, something which has preceded each of the last 6 economic recessions in the US.
"I'd like to see a period of sustained inflation under control," said Richmond Federal Reserve President Thomas Barkin last Friday, a voting member of the US central bank's policy team this year.
"Until we do, I think we're just going to have to continue to move rates into restrictive territory" despite last week's softer US inflation data. 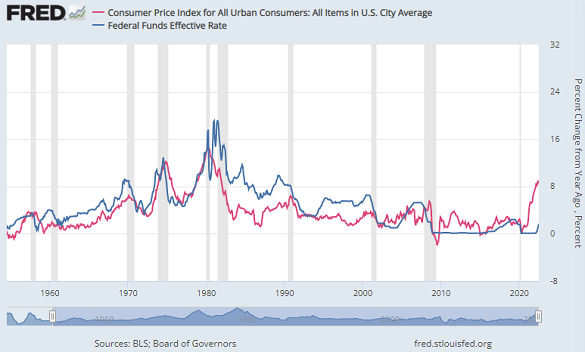 "What we need is not [just] a good report on inflation," said non-voting member Mary Daly, President of the San Francisco Fed, last week.
"It's encouraging, but it's not evidence of the goal we really want...[to show that the Fed is] on a path to bring inflation down substantially and achieve our price stability target".
Consumer-price inflation rose above the Fed's target pace of 2.0% in March 2021 and climbed to 9.0% this June, the highest in over 40 years.
Headline CPI inflation fell to 8.5% in July, its steepest deceleration since April 2020's Covid Crash in energy and other industrial commodity prices.
"Weak Chinese economic data, which prompted surprise rate cuts, appears to be behind the sell-off in gold, weakening sentiment towards commodities in general," said John Reade, Chief Market Strategist at the mining industry's World Gold Council, this morning.
China's industrial output grew 3.8% in July from a year earlier according to the National Bureau of Statistics (NBS), slowing from June and missing the 4.6% increase expected by analysts.
Retail sales, which only just returned to growth in June following new 'zero Covid' lockdowns and amid China's deepening property crisis, rose 2.7% from a year earlier, also slower from June and missing consensus forecasts for 5.0% growth.
Oil prices today fell by more than 3.6% following the data and interest-rate cut from China, the world's largest crude importer, extending Friday's drop.
Prices for silver, which finds nearly 60% of its annual demand from industrial uses, fell 2.5% to $20.30 per ounce Monday lunch time.
Platinum, which finds two-thirds of its demand from industrial uses, dropped 3.3% to $934 per ounce, while palladium – which finds well over four-fifths of its end-use demand from auto-catalysts to cut carbon emissions from gasoline engines – declined 2.1% to $2170 per ounce.
A delegation of US lawmakers arrived in Taiwan on Sunday for a 2-day trip, prompting fresh outrage from the Beijing government after House Speaker Nancy Pelosi's trip earlier this month.
"Members of the US Congress should act in consistence with the US government's one-China policy," said China's embassy in Washington on Sunday.
"Once again this proves that the US does not want to see stability across the Taiwan Straits and has spared no effort to stir up confrontation."
Data from world No.3 economy Japan also missed analyst forecasts on Monday, with second-quarter GDP data showing annualized growth of 2.2% as prices continued to show deflation overall despite the Yen's recent plunge on the currency market amid the surge in energy costs.