END_OF_DOCUMENT_TOKEN_TO_BE_REPLACED

GOLD PRICES moved sideways in a tight range around $1214 per ounce amid Russia's strong reaction to the US issuing new sanctions against it with China hitting back against the latest US tariffs and the British pound continuing to plunge on concerns of a hard Brexit, writes Atsuko Whitehouse at BullionVault.

Dmitry Polyanskiy, first deputy permanent representative of Russia to the UN blasted new US sanctions as ‘a theatre of the absurd’ this morning, following the announcement of fresh US sanctions on Russia after determining that it used nerve agent against a former Russian double agent living in the UK.  The new sanctions will take effect on or around 22 August, and relate to the exports of sensitive electronic components and other technologies.

Lawmakers said Russia would respond with counter sanctions, which could include bans on the exports of rockets or resources for manufacturing.

Polyanskiy, also stated “No proofs, no clues, no logic, no presumption of innocence, just highly-likelies. Only one rule: blame everything on Russia, no matter how absurd and fake it is. Let us welcome the United Sanctions of America!”

The US had expelled 60 Russian nationals following the nerve agent attack back in March and imposed sanctions in June on five Russian companies and three Russian individuals, who are all prohibited from any transactions involving the US financial system.

The Rouble fell to its lowest level against the dollar in nearly two years yesterday as the new sanctions were imposed.

The latest report from World Gold Council, published last week, states that the Russian central bank has been accumulating its gold reserve to a net 53.2 tonnes in Q2, 49% up on Q2 2017. This brought H1 net purchases to 105.3 tonnes, 5% up year-on-year, and gold reserves to 1,944 tonnes at the end of June.  The share of gold in Russia's total reserves grew from just 2.5 percent to over 17 percent for the last decade.  Russia made it into the top five of gold-holding countries in February.

The report proposes that “Russia’s voracious appetite for gold is strategic – amidst geopolitical tensions it looks to diversify away from the US dollar."

Russian holdings of Treasury securities declined 84 percent between March and May, falling to $14.9 billion from $96.1 billion in just two months, according to a U.S. Treasury Department report released last month.

The trade war between China and the United States looks set to intensify after China retaliated with $16 billion of new tariffs on US goods on Wednesday, responding to the US release of a finalized list of $16 billion in Chinese goods that will be hit with 25% tariffs on Tuesday.

The yuan has weakened by around 5 percent against the U.S. dollar this year so far.

Turkey’s lira plunged to a record and bond yields climbed as concerns deepened about a rift with the US over the detention of an American pastor and President Erdogan’s influence over the central bank.

Gold prices for UK investors continue to hold their three week high after jumping to £942 per ounce Wednesday as Sterling fell to an 11 month low against the US dollar, at $1.2854 on fears of a hard Brexit. 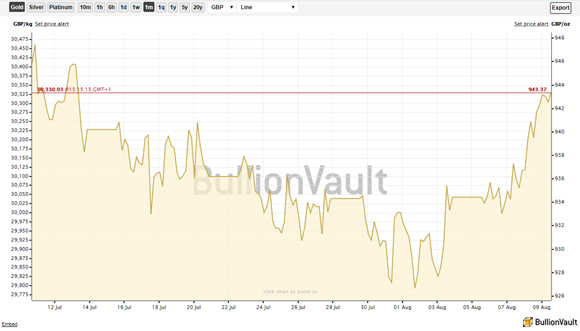 Sterling has been on a downward trajectory since Liam Fox, the international trade secretary, said last weekend that the probability of a no deal Brexit was now “60-40”. His remarks compounded concerns voiced by Bank of England boss Mark Carney last week. The Bank’s governor said the chances of a no deal Brexit were “uncomfortably high”.

"Some are thinking in the market that the Bank of England raised rates in order to give them ammunition to cut them in the face of no-deal," said Neil Jones, a foreign exchange expert at Mizuho Bank. "The next move by the central bank could be a cut rather than another hike." Nomura strategist Jordan Rochester added: "We remain bearish on the pound in the short term until the Brexit mess is out the way... "

US crude oil hovers near seven week lows of $66.92, after the first round of the US sanctions against Iran came into effect.  It dropped by more than 3 percent on Wednesday.

The US and Japan will hold their first bilateral trade talks in Washington today.

The US consumer prices for July are due tomorrow.  The US Central bank pays very close attention to this figure in its role of maintaining price stability.  It is expected to be up from June.