END_OF_DOCUMENT_TOKEN_TO_BE_REPLACED

GOLD PRICES sank in London trade Friday, dropping over $35 for the week after new US jobs data said July saw the 5th strongest monthly jump in employment on record.
After Wednesday's private-sector estimate from ADP Payrolls came in way below analyst forecasts, the Bureau of Labor Statistics today said non-farm payrolls expanded by 943,000 last month – over 70,000 more than consensus predictions – with June's figure also revised higher.
The US Dollar jumped 0.4% against a basket of other major currencies, rising to 1-week highs.
Gold priced in the Euro fell through €1500 per ounce for the first time since start-July, and UK gold prices in Pounds per ounce tested 4-month lows at £1270.
Industrial and agricultural commodities also rose, outpacing the Dollar while New York stock-market futures turned lower and major government bond prices all fell, driving longer-term interest rates higher from this week's significant lows.
The drop in US Treasury prices sent the real rate of interest, as suggested by 10-year TIPS, jumping to minus 1.04% per annum after setting fresh all-time lows earlier this week below minus 1.20%.
That's the sharpest 3-day jump since mid-February, when gold prices began their steep drop towards March's 11-month lows at $1685 per ounce. 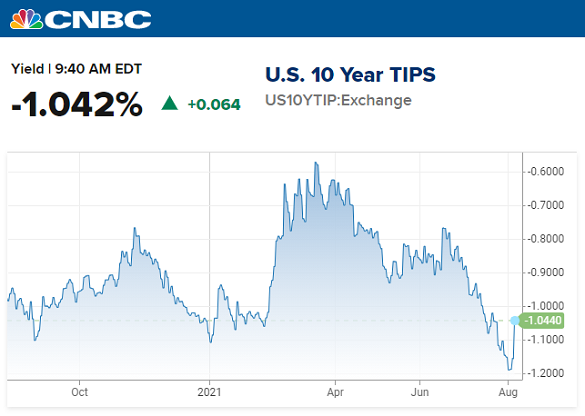 Gold typically shows a strong inverse relationship with TIPS yields, but until Friday that relationship had become the weakest in more than 2 years with gold failing to rise sharply even as real rates fell to new record lows.
"US job market recovery is underway," says a headline at CNN.
Gold sank to $1765 per ounce after the news, down 3.6% from Wednesday's touch of $1831 – the top of gold's 5-week trading range, which had seen $1790 at the bottom.
Ahead of today's Non-Farm Payrolls number, both the giant GLD and smaller IAU gold-backed ETFs saw net liquidation by shareholders on Thursday, putting them on track to show another weekly outflow of investor cash after recording their the first weekly inflow in 6 and 5 respectively last Friday.
Looking at the Comex derivatives market, "Certainly some aggressive shorts entered pre-NFP," says a note from Swiss bullion refiners MKS Pamp.
"A very strong number implies $1790 is the new ceiling...[but] gold probably needs a cleanout of hopeful bulls before it responds to the post-Delta liquidity program."
With the Delta variant of Covid-19 now in 135 countries worldwide, and new US infections breaking back above 100,000 per day, the White House's chief medical advisor, as well as vaccine maker Moderna, have warned that other new variants are very likely to emerge.
Silver also sank with gold prices on Friday, plunging to its lowest since 1 April at $24.30 per ounce with a $1 loss for the week.