END_OF_DOCUMENT_TOKEN_TO_BE_REPLACED

GOLD PRICES soared this Monday morning to multi-year highs in major currencies as China weakens the Yuan which breached the crucial 7-per-dollar as the US-China trade war escalates. Meanwhile in Hong Kong the chief executive said the city was on the verge of “a very dangerous situation,” writes Atsuko Whitehouse at BullionVault.

Spot gold hit fresh new highs in Pounds, Canadian dollar & Australian dollar on Monday.  It also rallied in Euros to a new 6.5-year high and just under a 6.5-year high in US dollar.  Even in safe-haven currencies such as the Japanese Yen the gold price hit a 4.5-year high while the currency rallied 0.7% to it’s strongest level against the US dollar since January’s so called fresh-crash. 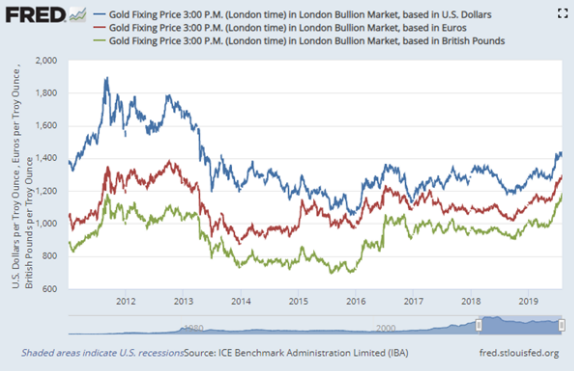 Gold prices jumped 1.7% to $1465 per ounce, the highest since 15th April 2013 this Monday lunch time while the Dollar index (DXY), which measures US dollar relative to a basket of foreign currencies, was down 0.4%.

UK gold prices rallied 1.7% to £1204 per ounce, the highest ever recorded as Sterling plunged further to 31-month low fuelling speculation that the Prime Minister Boris Johnson is preparing for an early general election.  The gold price for European investors went up 1% to €1309 per ounce.

China’s Yuan saw its biggest drop since August 2015, when officials announced a surprise devaluation that roiled markets. The People’s Bank of China said that it is able to keep the currency stable and at a reasonable level, and that it passed 7 yuan-per-dollar because of trade protectionism. The Yuan hasn’t traded lower than 7 versus the US dollar since 2008.

“I think this is clearly a retaliation that in the past China has refrained from doing,” Claudio Piron, co-head of Asia rates and foreign exchange strategy at Bank of America Merrill Lynch Global Research, said on Monday.

The Chinese government has also asked its state-owned enterprises to suspend imports of US agricultural products as China said it would fight back against US President Donald Trump’s decision to impose an additional 10% tariff on $300 billion worth of Chinese imports last Friday.

Staying in China, Hong Kong’s chief executive Carrie Lam met the press for first time in two weeks and warned that the protests were pushing the Chinese territory towards an “extremely dangerous situation” as city-wide strikes bring Hong Kong transport to a halt and shut down businesses as protesters blocked roads and tunnels and shut down trains, the latest escalation of a two-month campaign challenging China's authority in the city.

Data published today showed that China’s services sector expanded at the slowest pace in five months this July.  Shares plunged as much as 3.1% in Hong Kong.

Global stocks fell for a sixth day on Monday as MSCI Asia Pacific Index heads for its biggest decline since October and European shares fell to two-month lows, with the pan-European STOXX 600 index shedding 2% Monday lunch time on top of the 2.5% it lost on Friday - its worst day so far in 2019.

In gold’s No.2 consumer nation India, the Indian Government scrapped Article 370 which granted special status to the state of Jammu & Kashmir.

Jammu & Kashmir, the country’s only Muslim-majority state was put under total lockdown early Monday morning with tens of thousands of extra troops and paramilitary police being dispatched to maintain order in the region.

The Indian Rupees biggest drop since 2013 sent gold prices in rupee to all-time highs.  Gold price in China also jumped 3.25% to ¥332 per gram in Shanghai on Monday, making the highest cost of bullion in the world No.1 mining, importing and consumer nation.

Iran also added another geopolitical headache, by claiming on Sunday it has seized a third foreign oil tanker in the Gulf for "smuggling fuel for some Arab countries" and detained seven sailors, according to the reports.  Oil prices fell 1% after plunging 8% last week, the most in four years.