END_OF_DOCUMENT_TOKEN_TO_BE_REPLACED

GOLD PRICES erased an earlier 0.7% gain to 3-week highs in London trade Friday, closing July at $1754 per ounce in the world's central bullion market with its 4th monthly loss in a row.
Dropping 3.3% from the end of June, gold bullion prices this morning rose near $1768 per ounce before falling to $1754, the lowest London month-end since September 2021.
Global stock markets in contrast added 6.7% this month, rallying to 2717 points on the MSCI World Index – a 13-month low when first reached in May, but 250 points above mid-June's 18-month low.
Developed-world bond prices also rallied in July after falling hard in the first half of 2022, pulling 10-year US Treasury yields 30 basis points lower to 2.68% despite the Federal Reserve hiking its overnight rate by 75 bps for a second month running as inflation data came in at 4-decade highs above 9% per annum.
"Although bullion saw a sell-off below $1700" in July, Reuters quotes one spread-betting bookmaker, "it is significant that long-term support at $1675-80 was tested and held" last Thursday.
Gold's drop through $1800 had come on 1st July, when India – the precious metal's No.2 consumer nation – suddenly hiked bullion import duty back up to 12.5% in the face of a surging account deficit and a record-low Rupee on the currency market.
India's Prime Minister Narendra Modi today opened the new India International Bullion Exchange (IIBX) in Gujarat's Gift City, enabling jewellers to buy and then import metal directly, rather than via a qualifying bank.
Fabricated gold product demand worldwide was 1.8% greater than Q2 last year between April and June, new data from the mining industry's World Gold Council said this week, with jewelry consumption rising 3.7% by weight while retail bar and coin demand held deadflat.
That still put total consumer and technology demand 4.7% below the previous 5-year Q2 average excluding the Covid Crash in gold demand of 2020. 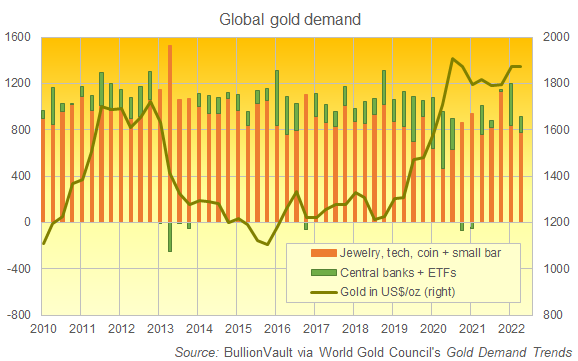 Central-bank demand for large gold bars continued to lag last year, taking the official sector's first-half total down 17.1% from H1 2021, while gold ETF investment trusts shrank by 1.0% across Q2 as shareholders sold out.
The giant GLD gold-backed ETF ended Thursday unchanged in size for the 3rd session running, heading for its 6th consecutive weekly outflow.
Now needing 1,005 tonnes of bullion to back its shares in issue – the least since late January – the GLD has shrunk 4.3% across July, its sharpest 1-month liquidation since March 2021.
World No.2 gold ETF the iShares IAU – also primarily listed in New York for US investors – has meantime shrunk by 1.7% for the 2nd month in a row, needing its smallest backing since start-March at 501 tonnes.
The April-June 2022 quarter meantime saw the largest Q2 volume of gold mining output on record, plus the strongest Q2 scrap supply since 2019.
On the economic front Friday, and after the US reported a second consecutive quarter of GDP contraction yesterday, Germany said it saw 0% growth in Q2.
Looking at the current rash of corporate results, "The bad news is that the percentage of companies beating earnings [forecasts] is the lowest it's been since 2015," says Michael Batnick, director of research at US advisory Ritholtz Wealth Management.
"The economy is rapidly transitioning towards stagflation," reckons economist Vincent Deluard at brokerage StoneX, warning of a 5% reduction in S&P500 index earnings-per-share over the next twelve months "due to rising borrowing costs, oil and the strong Dollar."
"In most recessions," says Ed Clissold, chief US strategist for advisors Ned Davis Research, "EPS growth has dropped by more than 20%."
Industrial commodities also fell in July, with crude oil rallying to $101 per barrel of US benchmark WTI on Friday but losing 5.6% from the end of last month as copper also bounced but traded 4.3% below June's close.
Silver prices lost less than gold bullion in July, surging after this week's US Fed rate-hike decision to trade back above $20 per ounce and cut this month's drop to 1.8% at London's benchmarking auctions.