END_OF_DOCUMENT_TOKEN_TO_BE_REPLACED

GOLD PRICES firmed on Monday at the start of an event-filled week that features the resumption of US-China trade talks, an expected Federal Reserve interest-rate cut and the release of US Nonfarm payroll numbers, writes Atsuko Whitehouse at BullionVault.

Spot gold edged higher, rising 0.1% to $1420 per ounce Monday lunch time, while the Dollar Index – a measure of the US currency's value versus its major peers – rose to its highest level in almost two months.

Markets digested the news that the European Central Bank (ECB) and 21 other central banks have decided not to renew the Central Bank Gold Agreement (CBGA) upon its expiry in September 2019 last Friday.

“The announcement is, on balance, bullish for the price - the information that the central banks believe the gold market is healthy enough to stand on its own two feet slightly outweighs the marginal risk that the agreement has been scrapped to facilitate a big sale,” said independent analyst Matthew Turner, formerly of Australian bank Macquarie.

CBGA was first agreed in 1999, immediately after the UK’s announcement of heavy gold sales drove prices 10% lower inside 2 months, the CBGA hasn’t seen any gold sales since 2008. 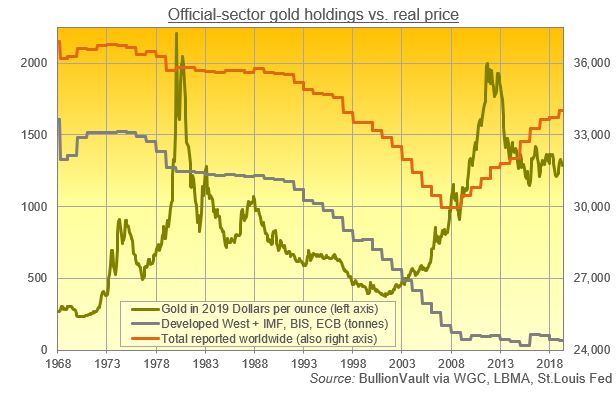 “Market has matured and none of the signatory central banks currently has plans to sell significant amounts of gold” ECB said in the statement last Friday.

“There has been a sea change in central banks’ attitudes toward gold since the financial crisis,” agreed Natalie Dempster, managing director of central banks and public policy at the World Gold Council.

“While back in 1999 they were net sellers to the tune of 500 tonnes, last year central banks bought record amounts of gold,” she said.

Bullion holdings rose by 651.5 tonnes last year, the most since 1971, according to World Gold Council figures.  Russia, China, Poland and Hungary added to reserves as economic growth slows, trade and geopolitical tensions rise and authorities seek to diversify away from the US dollar.

US and China trade talks resume in Shanghai this week for their first in-person talks since a G20 truce last month. The two-day meeting will start this Tuesday.

President Trump played down the odds of a significant breakthrough. “I don’t know if they’re going to make a deal,” he said Friday. “Maybe they will, maybe they won’t.”

Former Federal Reserve Chair Janet Yellen said she supports a 25-basis-point cut in the central bank’s benchmark interest rate due to a weaker global economy and low inflation in the United States.

“The global economy has weakened. I think partly it’s weakened because of conflicts over trade and the uncertainty that’s caused for businesses,” Yellen said on Sunday.

According to the CME’s FedWatch tool, betting on US interest-rate futures currently sees 78% on 25 basis-point cut and 22% on 50-basis point cut.  The bigger reduction has faded in recent days.

Gold prices for UK investors rose 1.1% to £1159 per ounce, a new 8-year high as the British pound fell to another two-year low this Monday morning while Prime Minister Boris Johnson’s  cabinet ramps up no-deal preparation.

The Confederation of British Industry said “There are no areas of relevance to the economy where the U.K., EU and the business community are all prepared well enough for no deal,” in a report published Sunday.

Euro gold prices were up 0.2% at €1277 per ounce while the Euro against the dollar declined to it’s weakest in more than two years. Germany’s 10 year yield fell two basis points to -0.39% the lowest level in more than three weeks after ECB signalled future stimulus last week.