END_OF_DOCUMENT_TOKEN_TO_BE_REPLACED

GOLD PRICES steadied within last week's tight range around $1800 per ounce in London on Monday as speculative positions on the Comex remained well below their recent average ahead of this week's Federal Reserve meeting on Tuesday and Wednesday, writes Atsuko Whitehouse at BullionVault.
The US Dollar also stayed little changed, stuck around a 3.5-month high.
US Treasury bonds meantime rallied, pushing their price up and taking 10-year yields down to 1.25% per annum, a 5-month low when reached last Monday, as the resurgent Delta Covid variant fuels uncertainty over the global economic growth outlook.
Spot gold prices edged higher by 0.1% to $1804 having failed to break below $1750 or above $1850 since the "hawkish" surprise of the Fed's June meeting.
"Gold remains in no-man's land," says a trading note from Swiss refining and finance group MKS Pamp.
"Unless a new catalyst emerges, the conviction for higher or lower prices is so low."
"Gold prices have found good support from the physical market on the downside, but have struggled to gain momentum as speculative positioning remains light," says Suki Cooper, analyst at Standard Chartered.
Latest data show that hedge funds and other leveraged speculators in Comex gold futures and options held their bullish betting as a group unchanged in the week-ending 20 July, but cut their bearish betting for the 3rd week in a row.
Overall, that pushed the net long position of Managed Money traders up to the biggest in 5 weeks.
But it remained 13% below the 5-year average and 63% below the all-time peak of September 2019. 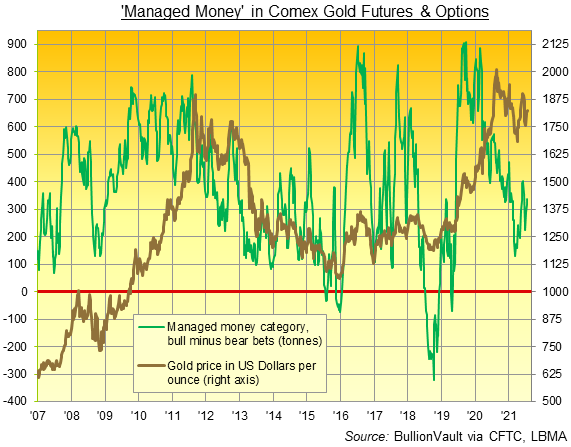 Gold-backed ETF trust funds struggled to expand last week, as the giant SPDR Gold Trust (NYSEArca: GLD) saw its 5th consecutive weekly liquidation.
Smaller competitor the iShares gold ETF (NYSEArca: IAU) has not seen any net inflows for 4 weeks.
European stock markets today eased from Friday's new all-time high, following Asian markets lower amid concerns over tighter financial regulations in China.
US stock futures also slipped Monday ahead of this week's flood of corporate earnings reports.
More than one-third of S&P500 companies will report quarterly results, including Facebook Inc, Tesla Inc, Apple Inc, Alphabet Inc, Microsoft Corp and Amazon.com.
On the political front, US and Chinese officials today began high-level talks in the Chinese city of Tianjin, just outside of Beijing, after an initial meeting in Alaska in March ended with little to show.
The two countries' relationship "is now in a stalemate and faces serious difficulties," said Chinese Vice Foreign Minister Xie Feng during the talks with US Deputy Secretary of State Wendy Sherman, according to an English-language press release from China's Ministry of Foreign Affairs.
Staying in China, gold prices on the Shanghai Gold Exchange meantime showed a small premium to London quotes today, with the incentive to new imports to the metal's No.1 consumer market easing to just above $2 per ounce compared with $5 last week and a longer-term average above $8.
Gold prices for European investors traded sideways at €1530 as the Euro strengthened against the US Dollar from new 3.5-month lows, while German's benchmark 10-year Bund yield edged back towards its recent five-month low at minus 0.45% per annum.
UK gold prices edged lower by 0.2% to £1312 per ounce as the number of people testing positive for Covid-19 showed another retreat from the 6-month highs hit as the Government relaxed most of the last social restrictions.
The number of new infections by date reported has fallen for five days in a row for the first time since February. It is also the first time since the start of the pandemic that a sustained drop in cases has not coincided with a national lockdown.