END_OF_DOCUMENT_TOKEN_TO_BE_REPLACED

The GOLD PRICE extended yesterday's post-ECB rally on Friday, trading over $50 per ounce above Thursday's test of the Dollar gold price's Covid pandemic floor at $1681 but rising less steeply for non-US investors after touching new 20-week lows in Sterling and Euro terms.
Silver also rose back above last weekend's level in US Dollars but held lower for other investors, reaching $18.95 after trying last week's 2-year lows again just before the 19-nation European Central Bank raised its key interest rate to zero but announced a new QE facility, widely seen as aiming to stem the financial impact of Italy's latest political crisis.
Crude oil fell for a 3rd session and liquified natural gas prices also eased again as the operator of the Nordstream pipeline from Russia to Germany said it's now flowing normally following 'maintenance' closure.
Wheat prices meanwhile fell over 2% – hitting levels last seen before Russia began its war on Ukraine in February – after Turkey and the United Nations brokered a deal to re-open shipments of grain out of Ukraine's besieged Black Sea ports.
"The gold price is being pressured by the fact that inflationary expectations are coming down," Reuters quotes Edward Meir, analyst at financial brokerage ED&F Man Capital Markets.
"Gold is in a downtrend and the rallies are short-lived."
US inflation last month hit 9.1% per year, a new 4-decade record.
Market-based forecasts for the next 5 years however peaked only at 2.7% in late April and have since retreated to 2.1%. 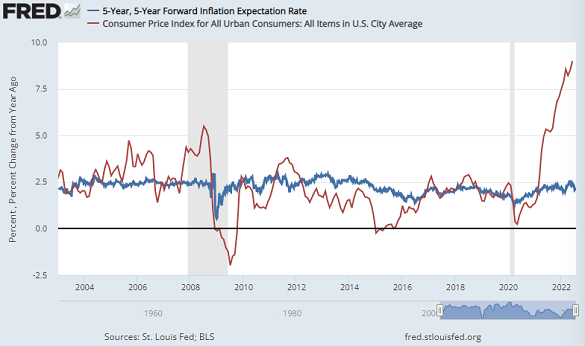 The Dollar rallied a little on Friday after retreating from last week's fresh 2-decade highs on the FX market, holding the Euro below $1.02 after the 19-nation single currency fell beneath parity for the first time since 2002.
That still meant gold's weekly rebound was erased for UK and Euro investors, with the UK gold price in Pounds per ounce trading at £1440 as Euro gold failed to recover above €1700.
Global stock markets edged higher, gaining for the 4th session running and rising to 6-week highs on the MSCI World Index.
Western government bond prices rose more dramatically, pushing sovereign borrowing costs sharply lower after the ECB yesterday unveiled its plan to target member states suffering an "unwarranted" rise in bond yields with new QE purchases.
While 10-year US Treasury yields fell to the lowest since late May at 2.81% per annum, Italy's bond yields dropped almost 1/3rd of a percentage point from this week's peak, hit as Rome's coalition government fell apart as right-wing members ousted Mario Draghi as Prime Minister, triggering a snap election for 2 months time which currently sees the far-right  Fratelli d'Italia party in front.
Now trading down to 3.41%, Italys's 10-year borrowing cost last month hit the highest since late-2013 at 4.28%.
Raising the ECB's deposit rates to 0% on Thursday, the team of Christine Lagarde also said its new Transmission Protection Instrument will enable fresh and targeted quantitative easing for member nations if markets become "disorderly" while the Governing Council "continues normalising" short-term interest rates,
The TPI will only be applied however where a Euro-member both meets the currency union's rules for government spending and deficit plans and "[is] experiencing a deterioration in financing conditions not warranted by country-specific fundamentals" – "a nasty echo of the morality-tinged arguments during the sovereign debt crisis a decade ago," says columnist John Authers at Bloomberg.
Meantime in China, the No.1 gold consumer nation, "An increased number of customers who have planned to get married recently or next year are taking advantage of gold prices falling to buy gold accessories and bars," says state-media channel China Daily.
Premiums over London quotes for gold bullion landed in Shanghai today rose 50 cents per ounce to offer an incentive of $8.10 to new imports.
Amid a worsening outlook for real-estate and banking debt, foreign investors last month sold over $8.3 billion-worth of China's sovereign bonds, the 5th monthly outflow and "an abrupt reversal for a market that had seen global participation grow every year since 2014," says Bloomberg.