END_OF_DOCUMENT_TOKEN_TO_BE_REPLACED

GOLD PRICES flipped yet again through the $1800 mark in Asian and London hours on Thursday, trading in a $5 range either side of that level while global stock markets extended their recovery from last week's drop as the European Central Bank reaffirmed its commitment to ultra-loose monetary policy.
Keeping deposit rates at minus 0.5% and continuing with record monthly levels of new QE bond purchases, the ECB's revamped policy statement repeated that – following its first strategic review in almost 2 decades – the 19-nation Eurozone " may [see] a transitory period in which inflation is moderately above [the 2.0%] target" as part of trying to reflate the world's No.2 economic bloc.
Longer-term borrowing costs today edged back for Germany, France and Italy and most other Euro nations, while gold priced in the single currency slipped again, erasing what remained of last week's 0.7% gain to trade back at €1523.
Wednesday's sell-off in Western sovereign bond market saw longer-term interest rates jump at their fastest pace in 5 weeks on both conventional 10-year Treasury debt and 10-year inflation-protected TIPS.
That real rate of interest reached minus 0.98% per annum, a new series low for 10-year TIPS yields when first reached on the last day of July 2020.
Gold prices were then surging towards last August's all-time high of $2075 per ounce. 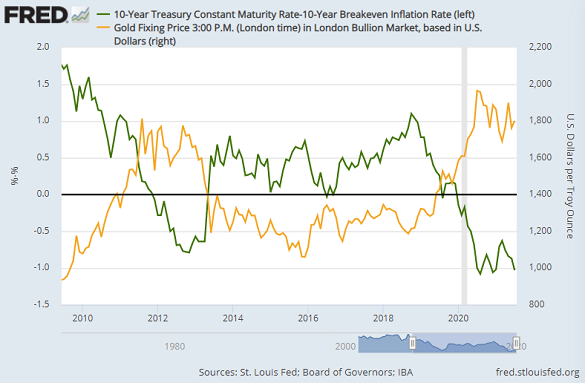 "The low real yield story alone cannot drive a structurally higher gold price," says a trading note from Swiss refining and finance group MKS Pamp.
But while it "requires a new catalyst...Gold is now persistently finding support around $1795, the handle it bounced off strongly on Monday, providing support to the belief that central banks have been more actively accumulating on dips this time around versus the [US Fed rumors of QE] taper of 2013."
Yesterday's updated gold reserves figures reported by the International Monetary Fund "supported" that view, MKS says, "with additions from the large new entrant, Brazil."
After buying 11.9 tonnes in May – its first substantial addition since November 2012 – the Banco Central bought another 41.8 tonnes in June, its heaviest 1-month addition since the end of 2000.
That took Brazil 10 places higher to No.32 in the world league table of official-sector gold owners.
"They are stealing the gold reserves of Venezuela," said Nicolás Maduro, the country's elected president, of the Bank of England's continued refusal to release around $2 billion of bullion it holds for the Latin American nation – a case now being judged "as soon as possible" by the UK's Supreme Court after a 3-day hearing.
"This is 21st century piracy."
The UK Government on Tuesday repeated that it recognizes opposition leader Juan Guaidó as President of Venezuela "clearly and unequivocally" while sanctions continue against the Maduro regime for murder, corruption and plundering state assets.
Maduro yesterday also called a letter from the Vatican – urging Venezuelans "and specially those who have some political responsibility...to sit down and negotiate in a serious way" to try ending its economic crisis and political violence – "a compendium of hatred."
Both Venezuela and fellow pariah Iran are being aided in beating international sanctions by a Chinese company registered in Hong Kong, Reuters reports today, using 14 oil tankers to ship crude to the world's No.2 economy even after the company – China Concord Petroleum Co (CCPC) – "was blacklisted by Washington two years ago for handling Iranian crude."
Crude oil prices extended their bounce from last week's steep plunge once again on Thursday, rising above $72.50 per barrel of European benchmark Brent.
"While gold has managed to recover some lost ground," says the latest weekly analysis from Metals Focus, "silver has been struggling to regain momentum [since] the drop in mid-June was triggered by the [US] Fed's unexpectedly hawkish tilt.
"Mounting concerns over the highly contagious Delta variant sparked a sell-off across risky assets," the specialist consultancy explains, and "As silver prices broke below technical support levels, this has led to some tactical selling."
Priced in silver, one ounce of gold today edged back below 72 ounces of the gray metal on Thursday after hitting a 6-month high near 73 ounces of silver early yesterday.