END_OF_DOCUMENT_TOKEN_TO_BE_REPLACED

GOLD PRICES fell again Thursday, nearing the multi-month lows against all major currencies hit after US inflation data came in with a new 4-decade high of 9.1%, spurring a fresh jump in betting that the Federal Reserve will hike interest rates more sharply again.
Surging energy and food costs led that jump, but core inflation also beat analyst forecasts, slowing only to 5.9% per year after hitting 4-decade highs at 6.4% in March.
Sinking to 11-month lows at $1707 on Wednesday's inflation-data release, gold immediately bounced by nearly $40 per ounce before slipping back again overnight and Thursday morning, touching $1710 at midday in London.
Silver prices continued their slide, falling to new 2-year lows near $18.50 per ounce, a loss of almost 1/3rd from March's 9-month high.
With less than a fortnight until the Federal Reserve's July meeting, betting on the Fed hiking its key overnight interest rate by 1 whole percentage point has leapt from zero this time last week to more than 4-in-5 positions today according to derivatives exchange the CME's FedWatch tool.
It would be the first such 100 basis points hike in more than 3 decades. But it would still leave the Fed Funds rate more than 6.3% below the pace of inflation, far more negative than the real rate of interest during the 1970s' worst inflationary periods. 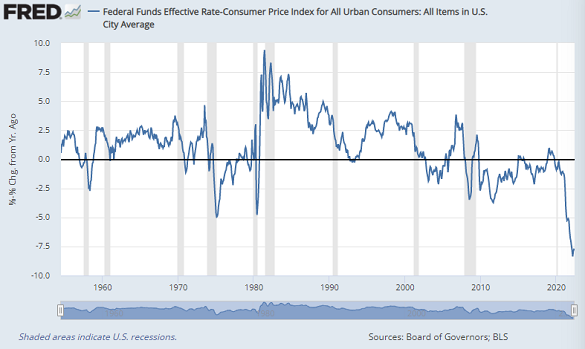 "Everything is in play" for the July meeting says Atlanta Fed president Raphael Bostic – not a voting Fed member in 2022 – "[and I] mean everything."
"[The inflation data] was uniformly bad," says FOMC voter and Cleveland Fed president Loretta Mester.
"There was no good news in that report at all. Inflation remains at an unacceptably high level."
Global stock markets today fell for the 4th session running, the worst such stretch for the MSCI World Index since mid-June's plunge to 19-month lows, as a small rally in Asian shares was more than offset by losses on European bourses.
Commodities also sank again, pulling crude oil further below $100 per barrel despite continued fears of supply shortages due to sanctions against Russia over its invasion of Ukraine.
Gold priced in Euros also fell but only back to last weekend's level around €1710 as fresh political turmoil hit the ruling coalition in Italy, the 19-nation currency union's 3rd largest economy.
The UK gold price in Pounds per ounce also erased this week's prior gains, trading at £1446, as would-be replacements for disgraced Prime Minister Boris Johnson continued campaigning to be voted leader of the ruling Conservative Party.
Germany's 10-year Bund yield meantime edged higher but held almost 3/4 of a percentage point below mid-June's spike to 2014 levels.
Italy's 10-year borrowing costs in contrast jumped towards 3.50% per annum, up by more than 1/3rd of a percent from late-June, as the fragile coalition Government looked set to break up – most likely ejecting former European Central Bank chief Mario Draghi as Prime Minister – over a bill to provide emergency cash support to business and households hit by inflation.
That drove the BTP-Bund spread – a measure of the bond market's concerns over Italian vs. German government debt – up to 2.2%, a 2-year high when hit in last month's global financial sell-off.
The Putin regime in Russia – which this week suspended natural gas shipments to Germany through the NordStream pipeline – today killed at least 17 people, including 3 children, in a missile attack on the central Ukrainian city of Vinnytsia.