END_OF_DOCUMENT_TOKEN_TO_BE_REPLACED

GOLD PRICES jumped to new 4-week highs in London trade Wednesday, regaining what was a 9-year high when reached this time in 2020 as Federal Reserve chief Jerome Powell confirmed no change to the US central bank's historic monetary stimulus despite the surge in inflation.
New data today said purchasing costs for US businesses jumped 7.3% in June from the same month last year, the 3rd record pace in a row on the Bureau of Labor Statistics' decade-long series.
Powell will give his semi-annual testimony to the US House Committee on Financial Services at midday in Washington.
"Inflation...will likely remain elevated in coming months [but] is being temporarily boosted by base effects [from last year's Covid commodity crash]," Powell will say in prepared remarks, referring to "inflation" and "employment"-related terms 16 times each.
"Conditions in the labor market have continued to improve, but there is still a long way to go.
"Reaching the standard of 'substantial further progress'" – the target repeatedly set for thinking about a cut to $120bn in monthly QE or a rise in zero interest rates – "is still a ways off."
Reaching $1829 per ounce after today's publication of Powell's comments to Congress and the US producer-price data, gold prices had stayed volatile overnight after the strongest US inflation reading since 1991 saw Treasury yields rise just 4 basis points to only a 2-week high before retreating again to 1.38% on 10-year debt today.
Core consumer-price inflation hit 4.6% per year in June, the fastest annual rise since November 1991.
"On the one hand, gold is getting boosted by inflation hedge," Reuters quotes Bank of China International's head of commodity strategy Xiao Fu, "but on the other hand, rising market expectation for a rake hike at the end of 2022 is offsetting some of the price advances." 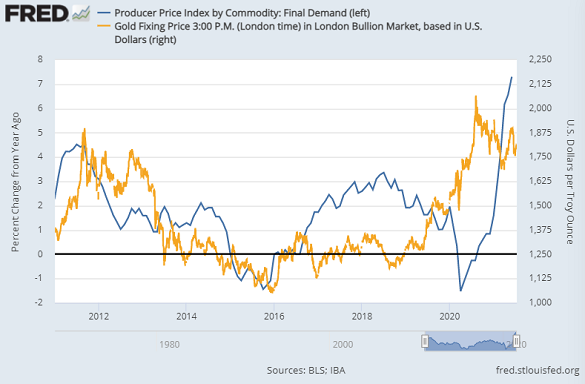 Inflation-protected US Treasury bonds today signalled real 10-year interest rates of minus 1.01% on Wednesday.
Suggesting a loss of worse than 1/10th in purchasing power for conventional bond holders by 2031, that was a series record for the gap between yields and the implied cost of living when first reached at the end of July 2020 as the first global wave of the Covid pandemic eased off.
Gold prices were then $140 per ounce above today's level.
Platinum meantime rose 1.5% on Wednesday to 1-month highs above $1130 per ounce as South Africa – the precious metal's No.1 mining nation – suffered a 5th day of violent riots following the arrest, conviction and jailing on corruption-related charges of former president Jacob Zuma.
Townships in Johannesburg, the capital Pretoria and the west-coast city of Durban were worst hit, with the death toll reaching 72 overnight amid widespread looting.
Platinum's sister-metal palladium – which in contrast comes primarily from Russia – slipped 0.5% for the day.
South Africa was the 20th Century's No.1 gold miner, and still has 93,000 people employed in the sector – one third of them at Sibanye Stillwater – but against that wage bill its major sites are becoming too costly to run and nearing the end of their life according to a spokesman for SSW.
Now digging 4 kilometers down, and once the biggest gold mine in Africa, Driefontein will run out around 2030.
"These mines have got a finite life," says Sibanye (JSE: SSW), "some of them are more than 70 years old, so they can't go on forever.
"[Maintenance and new mining] investment requires a lot of things and at the moment it's not warranted, the gold price is not high enough."
Fellow SA-listed miners Gold Fields (JSE: GFI) and AngloGold Ashanti (JSE: ANG) have also "shifted focus to more lucrative gold mines elsewhere in Africa, Australia and the Americas," says Bloomberg, "as they grapple with the costs and safety challenges of operating mines in the country."
Separate data today said industrial output in Japan, the world's 3rd largest national economy, sank 6.5% in May from April amid its worsening wave of Covid-19.
Foreign direct investment into China – the world No.2 economy – then fell hard in June, cutting year-on-year growth from 35% to less than 29%.
Consumer-price inflation in the UK rose last month to a 3-year high of 2.5%, and also beat analyst forecasts for Spain at 2.6%.
Silver prices today followed gold higher but managed only a 1-week high at $26.39 per ounce.